The Irish Times view on Brexit: power in Irish hands to avert no deal 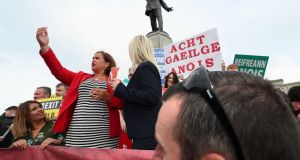 There is in Ireland, north and south, a grim sense of powerlessness. The majority in the North, which opposed Brexit and supports the backstop to prevent a hard Border, has no voice because the Assembly and Executive are not functioning and Sinn Féin’s seven seats in the House of Commons at Westminster are vacant. The Government, caught between the imperatives of protecting the Belfast Agreement on the one side and the integrity of the Single Market on the other, has in reality very little room to manoeuvre. The grandstanding performance of the new British prime minister Boris Johnson during his visit to Northern Ireland this week did nothing to assuage anxieties about his apparently reckless disregard for the consequences of the no-deal Brexit he has flourished as a rhetorical weapon in what he sees as a war of nerves with the European Union. Most people on the island must feel like impotent bystanders in Mr Johnson’s potentially disastrous psychodrama.

As we enter what may well be a decisive three months in the history of these islands, it is essential that something is done to break out of this sense that Ireland’s role is simply to be collateral damage in a very British war. If ever there is a time for creativity and imagination, for breaking the mould of normal party politics, it is now. One Irish party has it in its hands to take an initiative that would potentially transform the way Brexit is unfolding. The opportunity arises, as it has done at other periods in Irish history, because of the balance of power in the House of Commons. The loss of another Tory seat in a by-election on Thursday leaves Mr Johnson with a majority of just one seat. Yet the fractured nature of the opposition means that it is still possible that he could force through a no-deal Brexit on October 31st. The numbers are crucial.

This is why Sinn Féin’s seven Westminster seats are a vital asset for the island of Ireland - but an asset that is currently wasted. If they remain vacant, future historians will surely find it inexplicable that, given a chance to influence the course of events and avert a clear and present danger, such a critical resource was squandered. It need not be. There is a way to bring this dormant force to life and empower the majority in Northern Ireland that supports the backstop and opposes a hard Brexit. Sinn Féin will not take up those seats because it fought the Westminster election in 2017 on an abstentionist platform. But it could agree a plan with the other anti-Brexit parties, the SDLP, Alliance and the Greens: resign the seats temporarily. It could trigger by-elections in September, to be fought in each constituency by a non-partisan candidate who would hold the seat only until the Brexit crisis has passed. If it does not like this idea, Sinn Féin should urgently suggest an alternative. There is power in Irish hands and those who waste it will not be readily forgiven.