The Irish Times view on the budget countdown: Pressure on all fronts 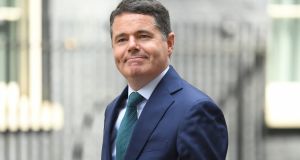 Minister for Finance Paschal Donohoe has his work cut out for him over the next two months to draft a budget capable of withstanding the shock of a no deal Brexit while dealing with pressure from big spending Government departments for ever more resources. Photograph: Leon Neal/Getty Images

Minister for Finance Paschal Donohoe has his work cut out for him over the next two months to draft a budget capable of withstanding the shock of a no-deal Brexit while dealing with pressure from big-spending Government departments for ever more resources. Reports this week reveal the scale of the political and budgetary pressures that Donohoe will have to wrestle with over the next two months ahead of the budget due to be unveiled in the Dáil on October 8th.

Minutes of the official oversight group on health spending disclosed serious concerns by officials about how staffing increases in the health service can be funded and they believe action to control spending on a range of services for disabled and older people will be required.

A further set of official figures released in response to a parliamentary question showed that the three worst departments for keeping their budgets under control are Health, Social Protection and Education. This is hardly a surprise as the three departments between them account for the vast bulk of Government spending.

The main cause of the overruns in Health and Education was extra pay and pension costs agreed under the Lansdowne Road Agreement, while the main item to overrun in Social Protection was the payment of the Christmas bonus to pensioners and social welfare recipients.

Larger than anticipated compensation payments being dealt with by the State Claims Agency was another significant factor in the general overrun.

Donohoe’s main problem is that there is little he can do about the rising cost of public service pay without prompting industrial relations chaos. In fact he is trying to hold the line on the existing arrangements with pressure mounting from a variety of sectors for bigger and more rapid increases than those already agreed.

With reducing the public service pay bill off the agenda, the only way the public finances can be kept under control is through control of spending. This will mean the curtailment of some social services and a hard look at the usefulness and affordability of some schemes that have been in operation for a considerable period.

Whichever way he turns the Minister is going to run into trouble. Cuts in public services will generate intense opposition. Already the Independent Alliance Minsters have lined up with Fianna Fáil to insist on a €5-a-week increase in pensions in the budget.

While this may be no more than traditional pre- budget posturing it shows how vulnerable the Government really is. Producing the kind of budget that the country needs to cope with a no-deal Brexit is fine in theory but Donohoe will need nerves of steel allied to some clever political footwork to deliver it.