The Irish Times view on US death penalty 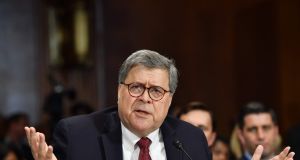 Unfortunately any decision by the deeply conservative Supreme Court will, however,be too late for the five men from the 62 on the federal death row selected by US attorney general William Barr for execution in December. File photograph: Getty

The Trump administration’s decision last month to resume federal executions is deeply disappointing, but it has kickstarted an important, long-delayed suit to the Supreme Court challenging the constitutionality of the death penalty.

Unfortunately any decision by the deeply conservative court will be too late for the five men from the 62 on the federal death row selected by US attorney general William Barr for execution in December.

The last federal execution took place in 2003. Since then, protracted litigation over the drugs historically used in injection executions prevented the government from continuing the practice.

President Donald Trump, in a bid to shore up his conservative base – 77 per cent of Republicans and 73 per cent of white evangelicals support the death penalty – has been calling for more use of the death penalty for drug traffickers and mass shooters, a request the justice department has since laid the groundwork to carry out.

There are 62 federal inmates on death row, but in the US the tide has been turning against capital punishment and 25 out of the 50 states have now instituted moratoriums or outright bans. According to a Pew study last year, support for the death penalty sits at 54 per cent for and 39 per cent against.

Some 170 out of the 194 UN member states have either abolished capital punishment in law or in practice. The UN and EU have protested to the US against the proposed resumption of killings.

Conservatives are not unanimous, however, and there has been some significant pushback against the federal decision. Some regard capital punishment as an example of poor state spending on a policy that simply does not work – the south and the midwest, the two regions that carry out the most executions, have the highest murder rates.

One commentator points to a 2011 study of California’s death row – the largest in the country – which found that the death sentence regime cost the state $184 million more annually than an equivalent life-without-parole system. And America’s fifth-largest death row, Pennsylvania, has put just three of its inmates to death since 1978, at an astonishing cost of $272 million per execution.