The Irish Times view on the FAI rescue: lessons from the debacle

While the FAI leadership is responsible for the mess, this was also a colossal failure of oversight 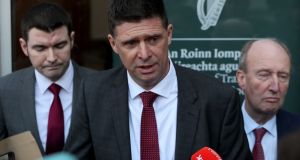 It says much about the public’s perception of the Football Association of Ireland (FAI) that there were those who felt it was not worth saving before Thursday’s package of supports was agreed. Football is the country’s most played sport, however, and an important part of its social fabric. Those who ran it over many years, most obviously John Delaney and the members of a board which was supposed to hold him to account, failed its players, its supporters and the many others to whom it is an important part of daily life.

The association has paid a price for years of mismanagement. The sweeping changes it has had to accept in return for State support will significantly erode the organisation’s future independence.

While the FAI leadership is responsible for the debacle, this was also a colossal failure of oversight. Those who should have been holding the FAI leadership to account, most obviously the State and Uefa as key funders, failed in their duty to the football community and it is right that they help to provide a reformed association with the resources required to meet its commitments and, beyond that, the opportunity to rebuild. The organisation’s 200 ordinary staff and many creditors should not be the ones to suffer here.

Those now in charge of the association have made a good start but they must do more than simply steer the FAI out of its financial crisis. They must complete the process of governance reform while putting in place structures that will ensure it is financially sustainable beyond the duration of the four-year deal agreed this week.

Minister for Sport Shane Ross has some cause for satisfaction with the part he has played in the changes that have taken place so far, but it shouldn’t be forgotten that before the FAI’s financial crisis became known as a result of dogged work by journalists, he was one of many to praise Delaney’s performance.

Sport Ireland was incapable of subjecting the FAI to real scrutiny, while the Oireachtas sport committee was, in its dealings with the association, abject and embarrassing. The FAI is not the only one with lessons to learn from all of this.