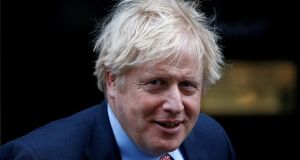 British prime minister Boris Johnson has played down the need for checks on East-West trade, despite the withdrawal agreement specifying that such checks are necessary to protect the EU single market. Photograph: Henry Nicholls/Reuters

As Brexit day approaches, the scale of the challenge ahead in negotiations on a future relationship between the EU and the UK becomes ever clearer. As a memo brought to Cabinet this week by Tánaiste Simon Coveney underlines, there are significant economic dangers here for Ireland, with any new trading relationship between the two sides set to have some impact on trade between Britain and Ireland – and potentially a very serious one in the case of harder forms of Brexit.

It would be in Ireland’s interests to have a trading arrangement between the two sides that is as free as possible. However, for now at least, the UK government is indicating that it wants to diverge from EU rules and regulations. In turn, this would mean the EU being only prepared to give UK businesses more restricted access to the EU single market. It is back to the old argument that the UK has to play by EU rules if it wants to retain the benefits of single market membership.

Much remains to play out, of course, and we have seen before how Boris Johnson can change course. However, for now it seems wise to assume that, as he says, he will not seek an extension of the transition period beyond the end of this year, setting up a hectic few months of negotiation after the talks start in earnest in March. Ireland will have less influence in this aspect of the talks than it did last time.

Whoever is in government next will also have to deal with a separate strand of negotiations on the new arrangements for trade between Northern Ireland and the rest of the UK. There may be conflict ahead here, as Johnson has played down the need for checks on this trade, despite the withdrawal agreement specifying that such checks are necessary to protect the EU single market. Quite reasonably, businesses in Northern Ireland are looking for clarity and also want to know what new requirement will apply on goods going in the other direction. This aspect of the final deal was agreed in haste – and has left a lot of things to be worked out. It is an area of significant potential problems in the months ahead.