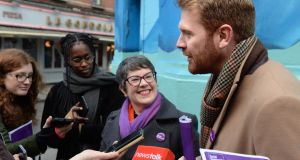 Drama and theatre studies as a Leaving Certificate subject and mandatory arts spending by local authorities are among the key measures in the Social Democrats’ arts and culture manifesto, launched in Dublin today.

The party also pledges to increase arts funding in Ireland to bring spending in line with the EU average of 0.4 per cent of GDP, and to focus on current spending for practising artists, rather than the Government’s emphasis on capital expenditure.

The Social Democrats also want to introduce a new system of special commercial rates for arts and culture venues and to offer a “rates holiday” to assist new creative projects to get established.

Expanded tax breaks for lower-income artists including a wider range of arts practitioners than the current system endorses and enhanced supports for the indigenous film and publishing industries are also among the proposals.

“We want a road map to bring us up to the average EU spending of about 0.4 per cent of GDP over the next five years,” said the Social Democrats Dublin Bay South candidate, Sarah Durcan.

Current Government funding for arts and culture will rise to €193 million this year, from €189 million in 2019.

Speaking in Temple Bar in Dublin city centre, Ms Durcan, who resigned her seat on the board of the Abbey Theatre to run for election, said: “We needed to reverse the creative drain that we’re seeing here in Dublin.

“We’re in the heart of Temple Bar – our cultural quarter which we invested significantly in in the 1990s – but that investment hasn’t kept up.”

She said “the small companies and individual artists who made this a vibrant cultural area are just gone because they can’t afford to live in Dublin, and most are earning less than the minimum wage”.

Dublin Central candidate Cllr Gary Gannon, who works with the Trinity Access Programme, mainly in Deis schools, highlighted the importance of drama and theatre studies as a Leaving Certificate subject.

“When you see schools where the arts are in existence, these are schools that are investing in confidence and in character development among young people, seeing them on stage, giving speeches, and they’re actually things that improve mental health and improve a young person’s place in the world.”

Cllr Gannon completed a Fetac level five course in theatrical performance after he was let go from an apprenticeship as a plumber “and I’d never been involved in the arts before and it just got me back in, built me back up”, he said, at a time he said when his mental health was not great.

Asked about mandatory arts funding by local authorities, he said budgets would be different for each local authority and would be based on consultation, but his party would make sure it was mandatory.

“I was quite shocked in January when Dublin City Council management told us that if we didn’t sell off some of our public lands then we wouldn’t be able to invest in the arts, and the arts have to be a much bigger consideration.”

The party also supports a system of night mayors to encourage “culture through the night”.

Cllr Gannon said it was about “ensuring that restaurants can stay open, that the streets are safe, that we have a programme of arts going on throughout the night”.

“It’s difficult to come into the city at night if you’re not going to a pub. The whole idea of the night mayor is to change that culture.”