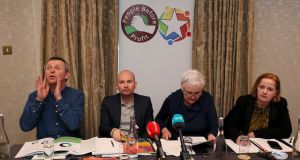 The People Before Profit party has pledged free public transport, interest free loans for retrofitting and a pollution tax on airline corporations as part of its climate action policy.

The party also says it would increase the cost of business air travel by imposing a charge of 20 per cent on flight tickets for anyone flying more than four times a year.

On agriculture, the party says it would take the major agri-corporations into public ownership and use those resources to finance a “just transition” for farmers and rural Ireland.

It would also “implement a major afforestation and rewilding programme” and offer farmers €3,000 a month for every hectare used for forestry and other carbon absorbing plants.

It also pledges to reduce the dairy herd by 50 per cent and offset the effect this has on farmers with a new “green payment” provided the farmer is not earning more than €100,000 a year once the payment is taken into account.

On the plan to move rapidly to free public transport, Richard Boyd Barrett says it will cost €570 million at the current capacity or €1.5 billion to make it “free and frequent.”

The party also unveiled plans to set up a state building company to embark on a major retrofit of the housing stock. This would involve upgrading 1.5 million houses over the next 20 years initially prioritising the 220,000 houses that currently have the lowest energy ratings.

In the first two years 50,000 homes would be retrofitted costing up to €2.5 billion annually.

Interest free loans of up to €30,000 would also be provided for consumers who need to retrofit their homes.

People Before Profit says it could reduce emissions in the residential sector by 66 per cent by 2030 through its proposals.

Combining all of the measures, it claims there would be a 53 per cent reduction in Ireland’s overall emissions.

Mr Boyd Barrett said that “being green is not a colour and it’s not a political brand. It’s about actually proposing and fighting for measures that will make a difference. And I really feel the public are owed the truth about about these things.”

He said People Before Profit has “the most radical” green policies.

RISE TD Paul Murphy said that “if we fail to achieve a radical reduction in carbon emissions and put society on a rapid transition to net zero emissions within the next ten years the consequences will be devastating.

The party has also said it would close all coal and peat fired power stations and retrain those staff on full pay and would also invest in cycle lanes and electrify the rail network.