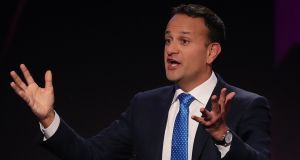 During the leaders’ debate on RTÉ on Monday night, Taoiseach Leo Varadkar spoke at length about his party’s long-held goal of moving the entry point for the higher rate of income tax to €50,000. While arguing this, he stated that “the average person working full-time in Ireland earns €47,000 per year, and I don’t think that average person should pay the highest rate of income tax”.

Upon what are they basing the claim?

The Central Statistics Office (CSO) publishes data on earnings and labour costs every quarter and also on an annual basis.

The most recent full year data relates to 2018 and it shows that average annual earnings increased by 3.3 per cent to €38,871 that year. When part-time workers are stripped out, the figure for full-time employees was €47,596 per year. That would support the Taoiseach’s core assertion, but his comments provoked much commentary on social media, with many disbelieving of the claim or suggesting they couldn’t understand how it could be true.

Part of the reason for this could be that as the figure supplied is an average, it will tend to be distorted by a few high-level earners. This is the same effect as when an extremely wealthy person walks into a bar, according to Aidan Regan, a political economist and associate professor in UCD’s School of Politics and International Relations, who was critical of the claim. “If there are 40 people in the bar and a billionaire walks in, everyone, on average becomes a millionaire,” he says. “If you want to talk about middle-income earners – or households – you need to talk about the median”. The median is the exact middle point in a set of figures. He said that median full-time earnings in Ireland are around €35,000, while median disposable income in Ireland is around €21,000, and median household gross income (rather than individual income) is around €47,000. His earnings data is sourced from the CSO’s labour force survey, and the income data from its Survey on Income and Living Conditions.

He argues that sociologists and researchers tend to favour the median, and that focusing on the average for full-time workers is not the best frame for analysing the nature of work in the economy, as it discounts half a million workers.

The Taoiseach’s statement is accurate, but leaves out some information key to getting a fuller picture of earnings in the State. Therefore the verdict is the claim is true, but missing some important information.