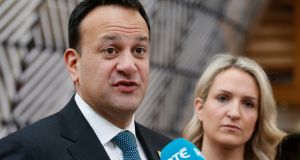 Taoiseach Leo Varadkar, attending the EU summit with Minister for European Affairs Helen McEntee, said Ireland was willing to pay more into the EU budget, but not if agricultural and regional programmes were cut back. Photograph: Julien Warnand/ EPA

An ambitious programme on a green new deal for the European Union, industrial and high technology renewal and a greater role in world politics as a more effective geopolitical actor cannot be realised without an agreement on its budget for the next seven years. Last week’s summit impasse in Brussels underlines the conflicts of interests between richer and poorer member-states and between different sectors and priorities. In aggregate the budget is only 1 per cent of the EU’s gross income. There is a strong case for increasing that proportion to realise these worthwhile aims.

Ireland’s position was put clearly by Taoiseach Leo Varadkar. He said Ireland was willing to pay more, but not if agricultural and regional programmes were cut back. It is difficult to ask farmers and food producers to do more on climate change if they are paid less. For that reason he aligned himself with French president Emmanuel Macron in defending agricultural spending. This is in contrast with Irish policy on extra fiscal powers for the EU alongside richer northern members which now oppose a budget increase. Varadkar’s logic points rather towards a larger financial capacity so that traditional priorities like agriculture and cohesion spending can be combined with these newer and necessary ones.

The so-called frugal four northern states – Austria, Denmark, Finland and Sweden – align with the Netherlands and Germany in defence of the existing level of spending and against paying more as net contributors. Some of them may compromise if they get offsetting rebates, but a lot more horsetrading will be needed in coming months. An additional problem arises from Brexit, which leaves a €75 billion shortfall in EU funding. Domestic politics feeds into the budget talks, since right-wing populists in these northern states complain about funding profligate and unaccountable governments in the east and south of the EU. Irish leaders are similarly mindful of the potential electoral fallout from cuts in farm and regional spending.

These talks raise the prospect of what direction EU policy-making should take and where Ireland should be aligned in that debate. It is difficult to make those links in the middle of a tactical battle over budget details, but the strategic necessity of doing so is clear. The EU is inaugurating a broad public debate on its future direction this year which will probably culminate in proposals for treaty change. Issues such as increasing its own resources, perhaps from digital or green new dealing taxation, will loom large, as will the need to develop its foreign policy, defence and security capacity. Ireland should participate fully in these debates, not least because they may require a referendum to approve changes. They provide an opportunity to decide where best to align Irish interests and values in the EU over the next decade.