The Irish Times view on death of Abu Bakr al-Baghdadi: Isis will now mutate and adapt 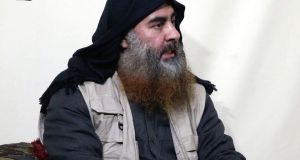 This file image made from video posted on a militant website April 29th this year purports to show the leader of the Islamic State group, Abu Bakr al-Baghdadi, being interviewed by his group’s Al-Furqan media outlet. Photograph: Al-Furqan media via AP

The death of Abu Bakr al-Baghdadi, the brutal ideologue who led Islamic State, is a severe blow to a network whose capabilities have been badly degraded since the collapse of its so-called caliphate in Syria and Iraq earlier this year. But it’s not a mortal blow; the organisation, also known as Isis, can be expected to mutate and adapt, and will continue to pose a major threat in the Levant, in Europe and elsewhere.

In July 2014, when Baghdadi made a rare appearance before his followers in the Nuri mosque in Mosul, Islamic State appeared unassailable. Taking control of the Iraqi city of 1.4 million people was perhaps the group’s most significant territorial gain. By then the jihadist outfit had overrun one-third of Iraq and half of neighbouring Syria, having opportunistically moved to fill the vacuum created by the Syrian civil war, and some 41,000 foreign recruits from 80 countries had flocked to sign up. Baghdadi ruled with unspeakable barbarity over millions of people, overseeing a regime that carried out beheadings, rapes, mass executions and public hangings – many of them transmitted across the world through social media. Islamic State was adept at self-enrichment. It exploited oil fields, robbed banks and collected taxes from those forced to live under its rule.

While Islamic State duly lost control of its last sliver of territory in Syria earlier this year, it did not go away. Nor will it now

The declaration of a caliphate was a powerful recruiting tool in itself, but it was also what ensured that Baghdadi’s group would, eventually, be met by a ferocious international response. Yet while Islamic State duly lost control of its last sliver of territory in Syria earlier this year, it did not go away. Nor will it now. The American withdrawal from northern Syria will create new instability there, giving Islamic State or its offshoots a chance to regroup. Thanks to so many preachers and apologists, its legions of ex-fighters and the power of the internet, its message continues to be disseminated.

In the same way that al-Qaeda became a franchise business, Islamic State already has satellite operations in Libya, the Philippines, Afghanisan and west Africa. Returnees have spread across Europe; how to deal with so many of them remains a difficult – and thus largely unresolved – question for western security services. Meanwhile, the things that attracted many young men in particular to Isis – sectarian divisions, political fissures or lack of education and jobs – are still there for reactionary ideologues to exploit.

Baghdadi’s caliphate was brought down by a concerted international effort. The same type of coordination resulted in his death, which was the result of cooperation between the Americans, the Kurds, Iraq, Turkey and Russia. Yet, as Donald Trump’s recent decision to withdraw troops demonstrates, he spurns international cooperation and shows no appetite for grappling with the underlying causes of terrorism. That all but guarantees that while Baghdadi may be dead, his horrific brand of modern terror will live on.