Back to the future: One of Macri’s strategic errors was not moving faster to reform the economy 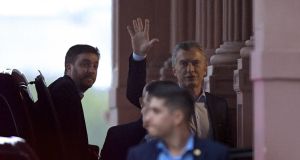 On coming to power in 2015, Mauricio Macri became Argentina’s first democratically elected president who was not from the Radicals and Peronists, the two populist movements that have dominated the South American nation’s affairs for over a century.

As such he promised a break with the policies that have transformed what was in the early 20th century one of the world’s richest countries into a byword for devaluations, debt and default. But instead of “normalising” the economy Macri has overseen its latest descent into crisis.

With his bold ambitions lying around him in ruins, his defeat in Sunday’s presidential election was all but inevitable.

He has paid a high price for his excessive confidence in fickle global markets being there to help him manage the transformation of the Argentine economy he had sought. Once initial enthusiasm among foreign investors for it cooled, the Macri administration’s plans – which relied on high levels of foreign financing – were left badly exposed.

For many, Macri’s fate can and is being read as a warning as to what happens when politicians place too much faith in economic orthodoxy as a panacea for a country’s ills. But it is also an example of how hard it is to break with populism once it enters a country’s body politic.

One of Macri’s strategic errors was not moving faster and more aggressively to reform the economy. Had he front-loaded the pain of doing so back in 2016 he might have had a better chance of being re-elected on Sunday.

His attempt at gradualism can be read in part as a fear of confronting voters raised on populist rhetoric with the reality that their society had been living beyond its means for decades.

The speed with which Macri’s political project unravelled is also an example of what can happen when new actors from outside traditional political structures face headwinds.

In 2015 Macri skilfully used social media to defeat the unpopular but well-entrenched Peronists.

But in 2019 his still relatively new political movement’s lack of capillarity in wider society meant he had little to fall back on when things started going awry in office.

Instead it is the Peronists, a political creed deeply woven into Argentina’s social fabric, in part because it encourages the fantasy that society can continue to live beyond its means, that has now returned to power in the person of Alberto Fernández. He won 48 per cent of the votes in Sunday’s election, compared to 40.5 per cent for Macri.

Peronism’s stints in power have always ended badly. Aside from Fernández’s reputation as a pragmatist, there is little else about the movement that gives grounds to believe this time will be any different.

1 Teenage boy dies at Powerscourt Waterfall in Co Wicklow
2 ‘I wandered around Dublin wondering: Is this what they call a capital city?’
3 Fresh investigation into the murder of Michaela McAreavey in Mauritius
4 ‘There were times I had to step outside to hide my tears, take deep breaths and then carry on’
5 Coronavirus: 50 new cases as Glynn says phase four delay disappointing for many
Real news has value SUBSCRIBE