US president Donald Trump has unveiled his "historic" Middle East peace plan, which proposes the creation of a Palestinian state with a capital in eastern Jerusalem. Video: Reuters 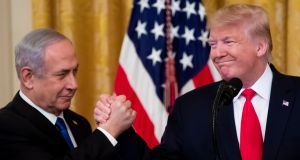 Donald Trump has come up with a novel approach to peace-brokering: give one side in an entrenched conflict most of what it wants and warn the other side of dire consequences if it refuses to agree.

Even by the standards of an administration as clumsy in international diplomacy as Trump’s, the long-awaited Middle East “vision for peace” announced at the White House on Tuesday is so plainly misguided as a blueprint for peace that it seems designed to be rejected outright by Palestinians, thereby giving Israeli hawks a pretext to proceed with unilateral steps to annex swathes of the occupied territories and formalise Israeli control over Palestinian lands.

The Trump administration makes no more than perfunctory efforts to portray this as an attempt at producing a balanced framework. The document, unveiled by the US president at a joint press conference with Israeli prime minister Binyamin Netanyahu, who lauded it as “a great plan for Israel”, rips up decades of US policy on all key “final status” issues. The plan ostensibly retains the principle of two states, Israeli and Palestinian, side by side.

But the proposed Palestinian state – an archipelago of Palestinian enclaves bisected by Israeli roads and dotted with Israeli settlements – would have no army and would be subject to Israeli security control in some areas. Palestinian refugees would be refused the “right of return”. And while Trump made a big play of the pledge that Palestinians would have their capital in east Jerusalem, Netanyahu said it would be in Abu Dis, a district on the outskirts of Jerusalem separated from the holy city by an Israeli security wall.

In exchange for losing 30 per cent of the West Bank, Palestinians would be given two patches of desert in the southern Negev, along the border with Egypt.

The rest of the world, including Ireland, must make clear its opposition to the incendiary US proposal

Absent from the event at the White House, of course, were the Palestinians themselves. Palestinian leaders broke off contact with US officials after Trump announced in December 2017 his plan to move the US embassy in Israel to Jerusalem. They swiftly rejected the plan and said it would inflame an already volatile situation. All attention now is on key Arab states such as Saudi Arabia, Egypt and Jordan. Washington has worked assiduously to bring those countries’ leaders – all of them US allies – onside, and Palestinians will be anxious to ensure they do not tacitly legitimise the proposals.

The danger for Palestinians – and the reason the rest of the world, including Ireland, must make clear its opposition to the incendiary US proposals – is that by signalling its support for these positions, the US has in effect given a green light to Israeli ultranationalists, emboldening Netanyahu’s right-wing government to take steps that have long been regarded as taboo.