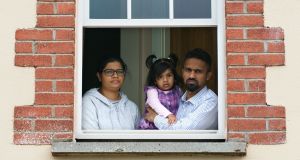 Asylum seekers Azwar and Safra Fuard from Sri Lanka with their daughter Mariyam (3) in a direct provision centre in Cahersiveen, Co Kerry, in May. Photograph: Fran Veale / The Irish Daily Mail

Direct provision was never an appropriate way of caring for those who come to Ireland seeking international protection. Since it was introduced 20 years ago, its residents have chronicled the flaws behind a system that in effect forced them to live for lengthy periods in ill-suited, often remote communal housing on a meagre allowance, at a remove from the society around them.

But only in recent years has momentum gathered behind the push for the abolition of the system. Vital work by retired judge Bryan McMahon, whose 2015 report began to chart a future beyond direct provision, and a seminal judgment from the Supreme Court, which resulted in asylum seekers having the right to work, have accelerated change. An important breakthrough came in the summer, when the incoming three-party Coalition pledged to end direct provision within the administration’s lifetime.

The missing piece of the jigsaw until now has been a plan outlining the shape of an alternative model and the practical steps required to make the transition. That arrived yesterday with the publication of a thoughtful and comprehensive report by a Government-commissioned advisory group chaired by Catherine Day, former secretary general of the European Commission.

It rightly concludes that a system which places applicants “for long periods in segregated, congregated accommodation with little privacy or scope for normal family life is not fit for purpose”. It identifies the length of time it takes to process applications as a fundamental problem, recommending a time limit that would ensure the conclusion of nearly all cases within 12 months. The current network of congregated-living centres would be replaced by own-door accommodation sourced through local authorities. At the level of principle, the report lays heavy emphasis on two points that can often be lost in the discussion on direct provision. First, that the dignity of the individual must be paramount. Second, that integration ought to be a priority from the beginning. A system that forces vulnerable newcomers onto the margins from day one is storing up problems for the individual and for itself.

Previous recommendations in this area have fallen due to the absence of implementation plans, the report notes, so it puts a welcome focus on the political and practical steps needed to make this a reality. That is now the challenge, and it’s a big one. Direct provision has survived this long because the political will to dismantle it has been absent, and because a fixation in some quarters on “deterrence” became an in-built disincentive to reform. The advisory group outlines a system that would be more humane, more efficient and more cost-effective than the status quo. It would also be a truer reflection of the people we are, and the community we aspire to be.