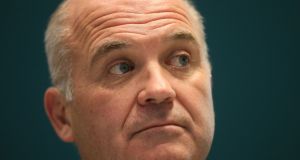 With incidence of Covid-19 rising rapidly and public health officials warning that hospitalisations and intensive-care admissions were climbing at rates that would soon put the healthcare system under severe pressure, the Government found itself in a difficult position when it met on Monday to consider whether to impose a nationwide lockdown. The second wave has hit. The disease is circulating widely, at a rate that cannot be checked by the State’s test-and-trace systems.

Despite some evidence that Level 3 restrictions had slowed transmission, that trend was insufficient for the National Public Health Emergency Team (Nphet), whose recommendation to move to Level 5, first made two weeks ago and restated last Friday, has finally been accepted by Cabinet. Ministers had resisted the advice once; to do so again, it concluded, with the epidemic worsening, would have been a potentially grave policy choice and a huge political gamble.

But let there be no mistake: moving to a Level-5 lockdown is itself a failure, and a very costly one. The WHO has described lockdowns as a last resort which can have a “profound negative impact” on individuals and societies. Many people will lose their jobs. Companies will go out of busines. Illnesses will go undiagnosed. These measures will disproportionately affect the disadvantaged, particularly those in poverty. The only bright spot in the announcement of a six-week shutdown was that schools would remain open, mitigating some of the worst effects of a lockdown for some of the most vulnerable among us.

When the reopening after the last lockdown began in June, the country was assured that from then on the strategy would shift towards intensive, targeted measures. An expanded test-and-trace system would hunt down the virus before it took hold again. The entire premise of the “Living with Covid” framework was co-existence. After a quiet summer, during which test-and-trace was stepped down and even pubs were allowed to reopen, the country began rapidly to move through those levels. Where we find ourselves now, facing into a six-week closure, is the opposite of living with Covid.

A fundamental problem with that framework was that it failed to set any objective criteria for moving between levels. That gap resulted in the tensions between Government and Nphet in recent weeks and undermined one of the supposed selling-points of the framework: that it would give the public certainty on the road ahead. Nor does the plan specify how the State, or individual counties, can move down those levels. As a result, we now enter a six-week lockdown with little sense of what success might look like. And we know, because it’s a lesson many countries have learned the hard way, that it’s much easier to impose a lockdown than to lift it.