The Irish Times view on crisis politics: one test passed, another looming

With the budget, the Government demonstrated common purpose and coherence. In its approach to the pandemic, it needs to start doing the same. 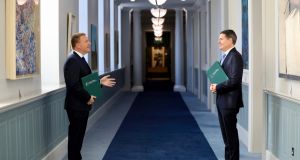 The almost unlimited cash available to Minister for Finance Paschal Donohoe and Minister for Public Expenditure Michael McGrath obviated the need for many of the divisive choices that would otherwise have faced them. Photograph: Julien Behal Photography

Though it was quickly overtaken by news of the rapidly worsening number of Covid-19 infections, the Government passed a significant milestone this week when it agreed, presented and passed its first budget.

The first budget is often a difficult challenge for a coalition government, as ministers are confronted with the reality that life in power is about difficult choices. The participating parties are forced to agree the compromises that are the essence of politics and without which no government can long endure.

This week, though, it was different. The almost unlimited cash available to Minister for Finance Paschal Donohoe and Minister for Public Expenditure Michael McGrath obviated the need for many of the divisive choices that would otherwise have faced them. Money for social housing, or for retrofitting projects? For more hospital beds, or for more doctors? For smaller classes, or for special education? This time, money could be found for all of the above, and much else besides. The Ministers responsible could have been forgiven for thinking: wouldn’t it be nice if it could be like this all the time?

But as McGrath himself observed at his post-budget press conference, obviously we can’t borrow €20 billion every year. That’s the figure, in round terms, that the Government will borrow this year, and again next year, piling €40 billion on to the national debt by the end of next year. It’s easy to get lost in the flurry of billions, so bear these figures in mind for context: at the beginning of this year, the national debt was about €200 billion and the State was running a balanced budget. The Government spends about €80-odd billion running the country. So borrowing a quarter of that sum is quite a big deal. It is also not sustainable for very long.

Nonetheless , the Government’s budgetary strategy is correct: it must preserve as much of the economy as possible until the pandemic passes and large-scale intervention is the only way to do that. The fiscal strategy is based on the hope that a vaccine will be found, treatments improve and the pandemic passes. It is hard to see what else it could be based on. At present Ministers are in the unusual position of hoping that next year’s budget is more difficult, but for the right reasons.

The budget is likely to have had a bonding effect on the Government, exemplified but not limited to the two Ministers who stewarded the process and whose close working relationship now forms a principal pillar of this administration. The Coalition now faces the onslaught of the second wave of Covid, with today’s meeting of senior Cabinet members marking an important moment in the national response. With the budget, the Government demonstrated common purpose and coherence. In its approach to the pandemic, it needs to start doing the same.

1 US election: ‘Trump would not be caught dead here unless he wanted our votes’
2 First full moon on Halloween night since 1955 will be rare ‘blue moon’
3 The real Contagion virus is out there and it’s causing virologists to worry
4 Trump vs Biden: stakes are high for the Irish economy
5 Five nursing homes receiving ‘intensive’ State support as they battle serious coronavirus outbreaks
Real news has value SUBSCRIBE