The Irish Times view on Northern Ireland: where hope and scepticism rhyme 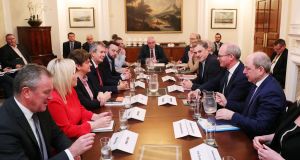 The DUP and Sinn Féin should do a deal, and fast. So say both governments – and the voters of the North’s two biggest parties, to judge from the December 12th poll. Health service workers on strike because of reduced budgets say Boris Johnson’s government must inject more money to reverse cuts. They also need decision-makers at Stormont.

Northern Secretary Julian Smith has maintained pressure by insisting only Stormont may make budget changes. Then yesterday he hinted agreement might win more cash from London and, subsequently, turned up the heat on the DUP by identifying it as the obstacle to a pre-Christmas deal. He also threatens to call an Assembly election on January 13th if no deal emerges, something neither lead party would relish after their losses last week. The cross-community Alliance, however, the election’s biggest winners, would like a refreshed Assembly to recognise an emergent non-sectarian sector. Both DUP and Sinn Féin may want to short-circuit that. The two who will have to share the title of first/deputy first minister in a restored Stormont Executive, Arlene Foster and Michelle O’Neill, both need a deal, but the ask is greater of O’Neill.

Last February, Sinn Féin and the DUP had an agreed draft deal only for Foster to pull out, having omitted to prepare her Assembly party for compromise. The signs were that Sinn Féin had won little except a fudged legislative status for protection of the Irish language. That was too much for DUP MLAs, the Orange Order and most MPs. In the months since that botched attempt at an agreement, DUP prestige, and Foster’s standing, have been badly damaged by self-destructive Brexiteering and Boris Johnson’s betrayal. Foster’s deputy and Westminster party leader Nigel Dodds losing his seat to Sinn Féin must have further unsettled her. She is also still awaiting publication of the RHI “cash-for-ash” report, delayed without explanation.

Unionism still asserts that Sinn Féin crashed the Stormont institutions, to destroy devolution in pursuit of a united Ireland. In fact the RHI scandal plus serial humiliation by the DUP infuriated republican supporters, forcing Foster’s Sinn Féin counterpart Martin McGuinness to call time as his fatal illness began. Then Brexit became a government project, leaving republicans to posture on the sidelines. The Sinn Féin removal of Dodds depended on remainer tactical voting and only momentarily disguised a poor performance generally. O’Neill and party leader Mary Lou McDonald badly need a new “project”, a favourite Sinn Féin concept. Their much-wished-for Border poll, transparent substitute for a united Ireland delivery date, is on no prospective government’s agenda. But will self-interest plus haste produce a sustainable Stormont ? There is more scepticism than hope.