The Irish Times view on Covid-19 vaccination programmes: we have to get this right

With clarity on the AstraZeneca vaccine, the public will expect far more detailed information on when, where and how people are to receive the jab 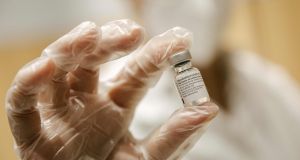 While the Government has made positive commitments on the provision of information on vaccination progress, the public updates so far have been sporadic. Photograph: Vladimir Zivojinovic / AFP via Getty Images

At no stage in Ireland’s Covid-19 crisis has the situation been more alarming, with case numbers at once-unthinkable levels, hospitals under pressure and the death toll rising on a steep curve. At the same time, there has never been a sense of greater hope that the emergency can be brought under control. And so the State, like so many others, must simultaneously manage two of the biggest challenges that have ever confronted it: containing a deadly disease while scrambling to vaccinate almost the entire population at unprecedented speed and amid persistent uncertainty over supply.

The global vaccination effort has run into early problems almost everywhere. Several European states have suffered early supply shortages. Even countries with ample stocks, such as the United States, have struggled to gets needles into arms. The British government has made commitments that its health officials appear to believe are premature. And the problems are much worse in the developing world, where governments are struggling to source vaccines in a market where most stocks have been bought up by western countries.

Given the scale, speed and complexity of the task, the Government has been given a certain amount of space to get its approach right. But such allowances won’t continue indefinitely, and it’s clear that by the end of the month the public will expect far more detailed information on when, where and how people are to receive their vaccine. By then the European Medicines Agency is likely to have decided whether to approve the AstraZeneca vaccine. The EU has placed a big bet on that one, which is easier to transport and store than those of Pfizer/BioNTech and Moderna, and Ireland would be in line to receive relatively large deliveries. That should provide the clarity needed to produce a detailed vaccination timeline.

Beyond the “when” are questions of “how” and “where”. Already some GPs – a priority group – are saying they have no information on how to get the jab. Some frontline workers have complained that other health service staff have been vaccinated before them. We still have not seen detailed plans for mass vaccination sites. And while the Government has made positive commitments on the provision of information, the public updates so far have been sporadic. In tandem with this logistical work must come a large-scale communications campaign, which will keep people informed of the process, not least on the science behind the vaccines. Take-up rates so far in Ireland have been high, but if significant levels of vaccine-scepticism were to arise it could compromise our ability to reach herd immunity this year.

The rapid development of safe, live-saving Covid-19 vaccines will turn out to be one of the great achievements of modern science. But one of the most difficult stages in the process is only beginning. We have to get it right.