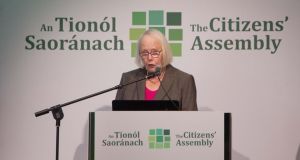 There is no arguing with the fact that the last Citizens’ Assembly, chaired by Ms Justice Mary Laffoy (above), and the Constitutional Convention that preceded it were a great success. Photograph: Tom Honan

The Government’s decision to convene two new citizens’ assemblies, one to consider local government in Dublin and the other to deal with gender equality, raises some important questions about how our democratic system should work. There is no arguing with the fact that the last Citizens’ Assembly and the Constitutional Convention that preceded it were a great success. They paved the way for the resolution of potentially contentious social issues of marriage equality and abortion.

The deliberations of the assemblies were a vital step on the road to generating support for constitutional change on both issues. Politicians had shirked dealing honestly with the abortion issue, in particular, for more than four decades and without the assembly’s work it is difficult to see how it would have been resolved. This success prompted interest from other democratic states around the world.

Although citizens’ assemblies have proved to be an important tool in confronting fundamental issues that have polarised our society, there are dangers in the reliance on such bodies to deal with everyday political issues. While their record in generating consensus on big divisive social issues has been good, it should not be forgotten that they have also made recommendations on more mundane subjects which have not found similar favour with the electorate.

In a referendum held on the same day as the marriage poll, voters rejected a proposal from the Constitutional Convention to reduce the age of presidential candidates from 35 to 21, while a number of its other recommendations were never put to the public. The message is that citizens’ assemblies do not always come up with proposals capable of commanding the support of a majority of voters, particularly when the issues involved are not regarded as being very important and have not generated serious debate.

The two new assemblies the Government is planning to convene can hardly be justified. The question of changing the local authority structure for Dublin to allow for a directly elected mayor is a purely political issue which TDs are well capable of deciding. The same is true of measures to ensure gender equality. There are clearly problems in terms of equal pay and burden sharing between the sexes but these are issues that TDs should be able to confront without having to rely on some outside body to tell them what to do.

An over-reliance on citizens’ assemblies will absolve politicians from making the decisions they are elected to take. There is a danger our democracy will be eroded and TDs will focus even more on the messenger-boy aspects of their work to the detriment of serious legislation. Under the Constitution, there is one Citizens’ Assembly above all others on which our democracy rests. It is called Dáil Éireann.

1 A Ryan Tubridy interview takes a terrifying twist
2 Dublin house deaths: Three young children named
3 Returning from Australia, I barely recognise my hometown
4 Des Bishop: ‘The last time my mother spoke was to say sorry’
5 Corey Taylor: After 20 years in Slipknot we are all beat up
Real news has value SUBSCRIBE