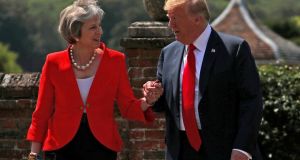 British prime minister Theresa May and US president Donald Trump walk to a joint news conference at Chequers, the official country residence of the prime minister, near Aylesbury, Britain, in July 2018. Photograph: Hannah McKay/Reuters

President Donald Trump’s international trade and foreign policies are now so intertwined that political allies are becoming enemies and some geopolitical antagonists friends. That perverse logic will be on display this week during his state visit to the UK, his D-Day meetings and his two-day visit to Ireland. It is most apparent in his support for Brexit and the pressure his administration is putting on European allies to join his sanctions regime against Iran following the US unilateral withdrawal from the deal to stop Iran developing nuclear arms. In response Europeans will have to develop more common positions in the face of a changing world, according to German chancellor Angela Merkel.

Germany, France and the UK, who still adhere to the Iran nuclear deal, have through the European Union-created Instex, a special purpose financial vehicle to protect European trade with Iran. A brutal use of secondary US sanctions through the dollar’s role as the predominant international reserve currency has stopped most big European companies, such as the French energy giant Total, from trading with Iran, as this threatens their continued dealings with the US. Instex has rapidly proven to be ineffective for such large players and is being used only by much smaller companies. That illustrates a deeper reality – the failure to develop a financial infrastructure of liquid safe assets associated with the euro which would challenge the dollar’s primary role in disputes like these.

Trump’s capricious use of US sanctions in pursuit of political ends to contain China and force Mexico to limit migration may be further applied to the EU if they fail to make progress on items like cars and agricultural goods. International markets are responding anxiously to the uncertainty in fear that such a mixture could escalate beyond control and threaten the global trading environment. Trump’s praise for Brexit and support of Boris Johnson as the next British prime minister on the eve of his state visit gives it a further political twist that would directly affect Ireland. If Johnson succeeds he is pledged to renegotiate the UK’s withdrawal agreement with Brussels on the Irish backstop and to conclude a trade deal with the US.

American negotiators have made it quite clear such a deal would be on their terms concerning agricultural goods and on labour and environmental standards. In that case the Irish border would become the fulcrum of a sharpening conflict between the US, the EU and the UK. Ireland’s open economy has depended so much on trade with each of these large partners that it would be especially challenged by such a confrontation, as by a no deal Brexit. Taoiseach Leo Varadkar must tell President Trump how centrally Ireland’s interests are at stake in these issues on which he has taken such a radical stance.