The Irish Times view on the DRC Ebola outbreak: spiralling out of control 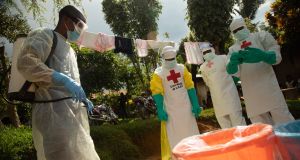 A Red Cross team responds to an alert from family members who lost a loved one suspected of having died of Ebola, in Beni, the Democratic Republic of the Congo, on June 2nd. Photograph: Maria Santto/EPA

Aid agencies are expected to confirm this week that more than 2,000 people have been infected with Ebola in the Democratic Republic of the Congo since the outbreak – now the second-largest on record – was declared in August last year. Some 1,339 people have been killed by Ebola, an often fatal disease caused by a virus that is transmitted by body fluids, as it has spread quickly in the remote east of the country.

The World Health Organisation and other responders appeared to be getting the outbreak under control in January. Having learned lessons from the outbreak that tore across west Africa in 2013-14, killing more than 11,000 people, the WHO and aid organisations mounted a large-scale treatment and containment operation. They were helped by a new, strikingly effective vaccine.

Since then, however, the international effort has been undermined by violence by armed groups and a widespread mistrust of aid agencies and local authorities in the affected area. The west African outbreak highlighted the key components of an effective response: isolating the sick, tracing their contacts, quickly and safely burying victims and vaccinating people in high-risk areas.

But that depends on local cooperation and freedom of movement for medics. In this long-neglected region, 1,000 km from Kinshasa, conspiracy theories took hold: the national government had imported the disease, it was invented by NGOs to justify their presence, quick burials were merely cover for organ theft. In an exceptionally hostile environment, insecurity has been rife. A treatment centre was set on fire. Medics were threatened and attacked. At times, responders have had to pull out of affected towns, and each time infection levels have risen.

The UN last month took measures to improve its response, including the appointment of a new emergency coordinator. It should also raise its Ebola work to the highest level of emergency response, a mechanism it activates when agencies are unable on their own to meet needs in the field.