The Irish Times view on carbon tax: an equitable transition

The fossil fuel companies and share-holders who, like big tobacco, have long tried to bury the evidence, must pay much the biggest price 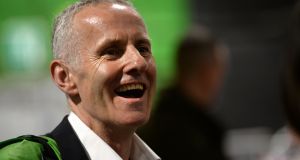 The comeback of the Green Party, exemplified by Ciarán Cuffe’s poll-topping performance in the Dublin European Parliament constituency, should not lead anyone to complacently imagine that the climate arguments have all been accepted by everyone. Photograph: Dara Mac Donaill

There has been, on the surface, a remarkable shift in national thinking about environmental issues. Scenarios only recently dismissed as alarmist are now adopted by almost the entire Oireachtas: witness the Joint Committee on Climate Action report, and the Climate and Biodiversity Emergency declaration.

It is not so clear, however, that most political leaders, and most of the general public, have yet grasped just how radical the changes needed are.

Nor should the comeback of the Green Party lead anyone to complacently imagine that the climate arguments have all been accepted by everyone. The Greens have been here before, when these issues had much less public traction. That only about one in 20 voters now support this party tells us that the environmental agenda still has a very steep hill to climb.

And if we are to climb it in time, the burden must not fall on the poorest sections of society.

A carbon tax is widely advocated as a key element in combatting global heating. It undoubtedly signals very directly, to everyone who uses fossil fuels, that their impact has an unacceptably high price. But the rebellion of the gilets jaunes against a carbon tax in France, and the protests against water charges here, tell us that penalising those already struggling to survive can backfire disastrously. In recognition of this, several carbon tax mitigation schemes have been proposed. These include returning revenue raised as dividends to citizens, increasing fuel allowances on social welfare, and grant-aiding green energy behavioural shifts. All have pros and cons.

But the polluter pays principle demands that the fossil fuel companies and share-holders who, like big tobacco, have long tried to bury the evidence, must pay much the biggest price. Aviation and shipping fuel should be commensurately taxed also. And carbon is not the only greenhouse gas; methane emissions from agriculture also must be factored in. The transition to a climate-friendly economy is an unprecedented challenge. It must be managed sensitively, consensually and, above all, equitably.

1 Mother and two children found dead at south Dublin house
2 Cork shootings: Gardaí find lengthy apparent suicide note on one of the dead men
3 Johnson’s Brexit Bill set to be blocked by House of Lords
4 Róisín Ingle: Five ways to find joy in a pandemic. Only one of them is illegal
5 Michael McDowell: We must check if this Covid-19 lockdown is really necessary
Real news has value SUBSCRIBE