The Irish Times view on Government’s performance: struggling with the message

Leading the country out of the pandemic was always going to be far more difficult than declaring a lockdown, but communications failures are making things worse 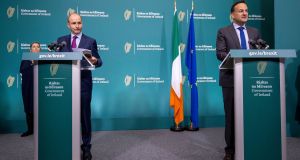 The confusion surrounding the announcement of the long-awaited roadmap for managing the Covid-19 pandemic has created the impression of indecision at the heart of government and damaged public confidence in the ability of those in power to lead the country safely out of the crisis. It is a lamentable failing at a critical time.

Not for the first time, it was due to poor communications and, in this instance, it was accompanied by a large dollop of bad luck. As acting chief medical officer Dr Ronan Glynn has pointed out, it was unfortunate that the plan was published at a time when the trajectory of the virus was changing. To make matters worse, Minister for Health Stephen Donnelly was the subject of a personal Covid scare which meant Cabinet members had to briefly restrict their movements.

The Minister himself had earlier created confusion by suggesting that people in Dublin “absolutely can” travel outside the county, only to have that clarified by Taoiseach Micheál Martin who said people were being encouraged not to do so. Tánaiste Leo Varadkar was even more emphatic, saying the Government was “strongly discouraging” people from travelling outside Dublin city or county unless it was necessary.

The Opposition pounced on the conflicts while a weary public tried to make sense of the evolving interpretation of the official travel advice. The episode added to the woes of the three-party Coalition which has stumbled from one political crisis to the next since the Government was formed at the end of June. Martin has struggled to articulate a clear and concise message and to find a voice that engages the Irish public, not helped by the impression sometimes created by Varadkar – a superior communicator – that he is intent on upstaging him.

Leading the country out of the pandemic was always going to be far more difficult than declaring a nationwide lockdown in March. This week’s confusion has arisen in large part because the Government tried to deal with the escalating problem in Dublin by not immediately setting the capital at Level 3 of the Covid plan, which would have led to more stringent restrictions.

As Glynn conceded, the attempt to be as nuanced and proportionate as possible did lead to confusion. It may ultimately prove necessary to elevate Dublin to Level 3 after all but the Government was surely right to try and establish if it would be possible to deal with the escalating numbers without going that far. The more stringent the lockdown the more clarity there will be, but it is in everybody’s interests to avoid drastic measures unless they are absolutely necessary.

The Government must do better by giving the clearest possible guidance. We as individuals must also assume responsibility for acting sensibly in the drive to suppress the virus.

1 Dr Tony Holohan expected to return to his post next week
2 How one couple’s weekend away resulted in 30 Covid-19 cases
3 Woulfe resignation would be unjust and disproportionate, Denham report concludes
4 Will your boss let you work long-term from home – or from abroad?
5 Two Portobello homes get the designer treatment
Real news has value SUBSCRIBE