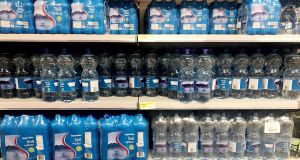 Shelves of bottled water at SuperValu Finglas Village as over 600,000 consumers awaited updates from Irish Water on a boil notice in place for parts of Dublin, Kildare and Meath. Photograph: Sam Boal / RollingNews.ie

More than 600,000 people have been issued with “boil water” notices for the second time in three weeks because of the poor quality of water being abstracted from the river Liffey. On the first occasion, the absence of an alarm system at the ageing Leixlip treatment plant meant that contaminated water entered the system undetected. On the second, the ingress of dirty water was noticed but it was decided to maintain public supplies for household use only, rather than for consumption.

Families and businesses are rightly angry because of the inconveniences involved and the cost of buying bottled water. But the Environmental Protection Agency and the Health Service Executive could not ignore the threat to public health posed by cryptosporidium and by other forms of contamination. Under-investment by successive governments and local authorities is at fault and further disruptions to drinking water supplies may follow. A second treatment plant will not be commissioned at Leixlip until late next year.

The first report by the State’s Water Advisory Body this week criticised as “unacceptable” the extent of leakages from the public supply network. It found sufficient progress had not been made in replacing old water mains and that cost overruns were emerging as an issue. At the same time, it reported an overall reduction in the number of “boil water” notices and found that drinking water standards were high.

Perhaps, because of its politically fraught past, Irish Water has become the whipping boy for everything that goes wrong with the supply and treatment of water. Yet the management, maintenance and operation of treatment plants remains exclusively with local authorities. Irish Water was not scheduled to take control of the old system and its workforce until 2025. But it now proposes to complete the process by 2021. Resistance to that development has been growing within Fórsa, a trade union that campaigned aggressively against the establishment of Irish Water.

There is some evidence of delay and obstruction. Irish Water announced a €500 million leakage-reduction scheme in 2017, but talks with five councils seeking permission for the work to be done were dragging on a year later. Pay demands have surfaced. And transfers from council employment are being resisted. Irish Water argues for the early, necessary control of operations, along with accountability and a capacity to manage risk.

The Department of Housing told an Oireachtas committee this week that “a critical gap in control” exists between Irish Water’s legal responsibility for providing water services and local authorities’ operational responsibilities on the ground. That basic flaw in the management of services makes accountability almost impossible. A fully integrated system is urgently required.

1 Ireland among countries urged to consider reinstating Covid-19 restrictions
2 One further Covid-19 related death and 35 new confirmed cases reported
3 Government begins work on new medium-term plan for Ireland in Covid-19 era
4 Ward at Naas General Hospital closed due to suspected Covid-19 outbreak
5 ‘I’ve been sleeping with my girlfriend’s sister. I need help. What do I do?’
Real news has value SUBSCRIBE