The Irish Times view on Gay Byrne: The reluctant revolutionary 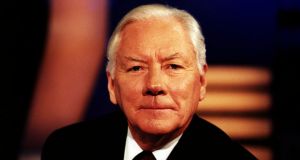 Gay Byrne embodied – as himself a perfect example of social mobility – the aspirations of an urbanising, liberalising and gradually more prosperous society.

To whom it concerns, which is everyone who lived through Ireland’s troubles and transformations from the 1960s to 1990s, a part of us has passed away.

Gay Byrne was a unique figure, not just in Irish broadcasting, but in Irish life and it is hard to think of any parallel elsewhere to his influence over such a long period.

He was the linchpin of the national broadcaster for three decades. He was the nation’s arch provocateur and favourite son, shocking transgressor and father confessor.

He combined and contained contradictions – all the contradictions of a society in transition, poised as Ireland was between a profound conservatism and an impatience for change, a closed culture opening itself up to a world of uncertainties. In no other time could a supposed light entertainer like Gay Byrne have stood at once for a challenging modernity and a comforting continuity.

This is not to say that he was a mere product of his time and place. He was a world-class broadcaster who could have made a fine career anywhere in the English-speaking world. Particularly in the early years, he had an American-style sheen of clean-cut smoothness that represented, on this side of the Atlantic, all that was new about the new medium of television.

He was a performer – his training as an actor was always present in the public self he sustained for so long, a persona that very seldom betrayed any inner emotion. And this performance was supremely professional: he exercised a fierce control over his shows and prepared himself with thoroughness and relentless discipline.

But what made him so extraordinary was the injection of this persona into a culture that needed it. He embodied – as himself a perfect example of social mobility – the aspirations of an urbanising, liberalising and gradually more prosperous society.

But he was also perfect in being a reluctant revolutionary. His personal instincts never strayed very far from those of Fianna Fáil and the Catholic church, even while his journalistic and show-business instincts led him into all the dangerous terrain of sexual, religious and political controversy.

He had an amazingly protean quality, able on his freewheeling, genre-busting Late Late Show, to turn, without putting a hair on his perfectly-coiffed head out of place, from light entertainer to deadly interrogator and back again. He could be at once extremely intimate (hence he was a supreme master of radio) and entirely unknowable.

Above all, he treated his viewers and listeners with respect. He gave them comfort and distraction when they needed it, but he also provided just the right amount of disturbance and discomfort to make sure the national conversation would start when the show was over.

1 More than 30 people queue overnight to secure property in Carlow
2 Coronavirus: Further 430 cases reported in State is most in a day since April
3 ‘To die of love’: The 1968 sex scandal that still fascinates France
4 Man with electric scooter who died in Meath was due to get married in the coming weeks
5 Susie Dent: ‘Jimmy Carr is incredibly rude to me. I took it as a compliment’
Real news has value SUBSCRIBE