The Irish Times view on Irish soldiers in Mali: a war fought in the dark 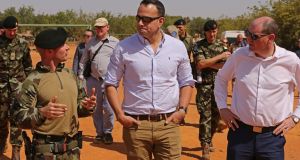 Taoiseach Leo Varadkar visiting Irish troops in Mali in January. The troops were there in a non-combat training role, but since September 14 members of the Army Ranger Wing have been active as part of the UN mission in the country. Photograph: Defence Forces

The killing of at least 54 Malian soldiers and one civilian near the country’s border with Niger last weekend underlines the acute dangers of a conflict that poses risks far beyond the deserts of the Sahel. It also reinforces the need for greater Government transparency on the activities of Irish soldiers attached to the UN-mandated mission in Mali.

The crisis has its origins in the events of 2012, when Islamists took advantage of a Tuareg separatist uprising and took over much of remote northern Mali. There they imposed sharia law and threatened to sweep south towards the capital, Bamako. A French military intervention stopped them in their tracks, but the Islamists adapted as an insurgent force. Given northern Mali’s position on a key strategic corridor, the international community is heavily invested in the task of restoring stability. The UN mission, known as Minusma, comprises more than 15,000 personnel and is regarded as the most dangerous UN mission in the world; to date more than 200 of its peacekeepers have been killed by gun attacks, car bombs and improvised explosive devices.

Following approval earlier this year, 14 members of the Army Ranger Wing are being sent to join the UN mission, with the first contingent having left Ireland in September. The Government says robust security measures are in place to give the best protection to the Irish soldiers. Moreover, the deployment has satisfied the so-called triple-lock, which requires a UN mandate as well as approval from the Government and the Dáil.

Since the first Irish soldiers departed in September, the provision of information on their activities has been minimal

However, the Government must do more to explain its thinking on the difficult questions the deployment raises. A debate has long raged among security specialists and humanitarians over Minusma, which has more in common with a counter-insurgency war than the ceasefire-monitoring missions Irish troops have traditionally joined. This is the first time a UN peacekeeping operation has been tasked with helping a state take control over territory held by terrorists. Many players, including the International Committee of the Red Cross, have concerns about that. Some believe the offensive nature of the mission makes it “a party to the conflict”, a designation that would have legal implications. No matter how noble the blue helmets’ intentions, many Malians see them as agents of a discredited, corrupt government.

When the Cabinet signed off on the deployment in June, it made almost no public comment on the subject. The subsequent Dáil debate highlighted some of the complexities but left key questions unanswered. Since the first Irish soldiers departed in September, the provision of information on their activities has been minimal. Minister of State for Defence Paul Kehoe says he receives “regular” updates from the theatre of war. He should share them with the rest of us.