The Irish Times view on Boeing’s 737 Max: a crisis of confidence 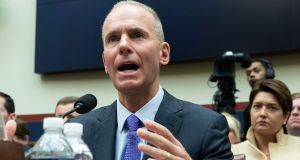 President and CEO of Boeing Dennis Muilenburg testifies during a House committee hearing on the Boeing 737 Max, at Capitol Hill, US. Photograph: Michael Reynolds/EPA

Boeing chief executive Dennis Muilenburg was grilled by a US congressional committee on Tuesday about the company’s safety culture in light of two crashes involving its new 737 Max airline in the past 12 months, which resulted in the deaths of 346 people. The crisis has called into question the future of the aircraft – which has been grounded worldwide for almost eight months – and the credibility of Boeing, which was accused by Senator Richard Blumenthal of engaging in “a pattern of deliberate concealment” about safety issues involving the Max and of supplying “flying coffins”.

Investigations have pointed to the MCAS anti-stall software on the 737 Max as a major factor in the crashes. Boeing is accused of producing a flawed design and of failing to give pilots enough information on how to handle it in certain extreme circumstances. It has also been accused of putting undue pressure on engineers carrying out the certification process, as it sought to compete with European rival Airbus.

Boeing faces multiple investigations, including a criminal inquiry led by the US justice department

Internal messages, sent by Boeing’s chief test pilot Mark Forkner in 2016, have emerged complaining of “egregious” erratic behaviour of the MCAS system in flight simulator tests. Forkner also referred to “Jedi mind tricks” to persuade regulators to approve the plane. Muilenburg claimed that he only became fully aware of the details of the messages a “couple of weeks ago”. This in spite of Boeing knowing of the exchange before the Ethiopian Airlines crash in March.

Boeing faces multiple investigations including a criminal inquiry led by the US justice department. And even if the Max is certified as safe in the coming months, many passengers may refuse to fly on the aircraft. Who could blame them?

The US company has rejected suggestions that manufacturers should no longer be allowed to test their own jets on behalf of regulators. At a minimum, however, that certification processes should take much longer. In the meantime, Boeing faces a long haul to regain the trust of customers and passengers. Muilenburg’s testimony suggests that destination is some way off.