Had the tribunal of inquiry taken gardaí to task properly, some subsequent scandals involving garda misconduct might have been avoided 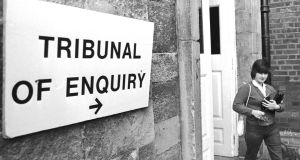 Joanne Hayes leaving the tribunal of enquiry into the Kerry Babies in June 1985. Photograph: Matt Kavanagh

The Kerry Babies case has come to symbolise the treatment of women who stepped outside the conventions of the Ireland of a generation ago. But it was always a story of two parts.

The attitudes to women came to the fore during the tribunal of inquiry, during which Joanne Hayes was subjected to fiercely intrusive cross-examination about her sexual behaviour, prompting protests outside the hearings. But the tribunal had been set up to investigate the other side in the inquiry, the Garda Síochána, and how detectives had come to acquire “confessions” from the Hayes family which could not be true.

The discovery of the body of an infant with 28 stab wounds on White Strand near Caherciveen in April 1984 led gardaí to Hayes, who had recently given birth but had no baby. She, her sister and two brothers were questioned in Tralee Garda station; Hayes “confessed” to the murder and her siblings gave detailed accounts of taking the body from their home in Abbeydorney and throwing it into the sea at Slea Head.

From there, according to local experts, it could drift across Dingle Bay to White Strand, some 80 km from the Hayes house. The detectives had confessions with details which neatly fitted the crime. But their case quickly fell apart when Hayes revealed the location of her baby’s body on the family farm.

The late Mr Justice Kevin Lynch effectively treated the inquiry like a civil case seeking damages for ill-treatment in Garda custody. He concentrated on the family’s veracity, blaming their “confessions” on guilty consciences.

The gardaí were merely “gilding the lily” as they came up with ever more fanciful theories of multiple births and fathers to avoid admitting that people in their custody had made false statements which were used to initiate prosecutions. DNA evidence finally destroyed their case three years ago, leading to Garda and government apologies to the Hayes family.

Had the tribunal taken the gardaí to task properly, perhaps some of the scandals involving garda misconduct in subsequent decades might have been avoided. And the Hayes family would not be still seeking court remedies 35 years on.