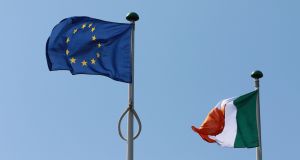 The EU’s institutions are pulling in the same direction in a collective economic effort. Photograph Nick Bradshaw/The Irish Times

The European Central Bank (ECB) is on Friday expected to report a third consecutive month of deflation in the euro zone – something it has done only twice before. Its current 3.1 per cent fourth-quarter prediction for economic growth across the zone looks increasingly untenable. But analysts don’t expect the bank to row in with another stimulus or quantitative easing package, yet. Perhaps in December.

ECB president Christine Lagarde is likely to report a small downturn in inflation and a rise in the value of the euro, but economists fear that the European economy may have entered a Japanese-style cycle of weak growth, negative interest rates and sub-zero inflation. They warn of a “lowflation trap” – bad news for investment – and the ECB has admitted that deflation is likely to last until early next year, when it hopes a reversal of German tax cuts will boost prices.

It is clear that the new round of anti-coronavirus measures, with curfews in France, Italy and Spain, and Level 5 restrictions in Ireland, will undermine a tentative recovery in the euro zone which saw GDP grow by some 10 per cent between the second and third quarters, after deep recession in the first half of the year.

The anti-recession armoury of the EU and the ECB has been enormously strengthened in the couple of years since Lagarde’s predecessor, Mario Draghi, broke with the bank’s hands-off strategy and embraced quantitative easing. New ground was also broken in July when EU leaders agreed to a €750 billion recovery fund and to permit the European Commission to undertake large-scale borrowing for the first time in its history. That involves handing out €390 billion to member states as non-repayable grants.

Lagarde is encouraging member states to consider turning the joint-debt instruments into permanent tools, although many see that as a federalising step too far.

Last week, the European Commission issued a hugely successful social bond aimed at programmes for workers displaced by the pandemic – €17 billion issuance in total with record demand of €233 billion – demonstrating that the EU can indeed raise money relatively easily to help support the economy.

The ECB’s own commitment to assisting the recovery involves a €1.35 trillion bond-buying programme and a willingness to accept bonds as collateral even if they were downgraded below investment grade status after the pandemic started. It has also begun lending money to banks at rates as low as minus 1 per cent.

Difficult talks on the shape and scope of the recovery fund are underway with the European Parliament and aid may be slow coming to member states. But the EU’s institutions are pulling in the same direction in a collective economic effort that marks a significant step up in integration.