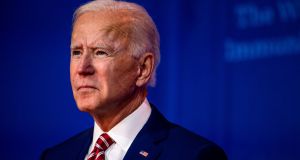 Joe Biden, the Democratic presidential nominee, pauses while speaking about his plan to beat the coronavirus, at The Queen theater in Wilmington, Delaware on Friday. Photograph: Hilary Swift/The New York Times

Mostly it was vintage Trump. Thursday night’s second and last TV debate before the US election saw the president ploughing well-worn themes and, as a CNN commentator put it, “lying like Pinocchio”. On the offensive, swatting away claims about his finances – dodging questions about a newly discovered Chinese bank account – with attacks on former vice-president Joe Biden’s honesty and the latter’s son’s business dealings. Again and again, he repeated a mantra about “insider” Biden: 47 years in politics, and what to show for it?

Trump suggestedthat the pandemic would “soon be gone”. His problem is that on that day, the US logged 73,000 new infections, its highest daily tally since late July. “Anyone who is responsible for that many deaths should not remain as president,” Biden responded. But, overall, the tone was more polite and subdued than the bearpit round one, with fewer angry interruptions, and the moderator’s new mic switch was hardly needed. As if Trump had indeed listened to the counsel of advisers and was determined to show waverers he wasn’t really Trump.

The president landed no knockout blows, and outside his large, dwindling base that would have been the only way to convince waverers. But 48 million Americans have already voted and time is short. Biden is sustaining significant leads nationally (8.7 per cent, according to Real Clear Politics) and in all the key swing states except Ohio.

One got a better sense of what Biden would do as president on key policy issues, from Obamacare to climate change, and, although unwilling to set out a specific programme for his second term, Trump did engage more in substantive issues, while grossly caricaturing his rival’s positions. Biden wanted to destroy the oil industry, we were told, while the president promised only he could secure the health insurance position of the millions with pre-existing conditions. He insisted he was the “least racist person in the room” and had done more for African Americans than anyone since Abraham Lincoln.

As usual, a few pinches of salt were needed.