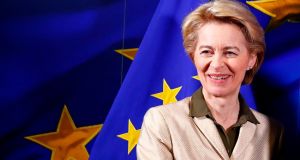 For member-state leaders, the new European Commission, led by Ursula von der Leyen, represents the turning of a page in the EU’s history. Photograph: Francois Lenoir/AFP via Getty Images

For Ursula von der Leyen – known as VDL – the overwhelming European Parliament vote for her new Commission represents a “vote of confidence” for an “agenda of change”. They can now start work from Sunday.

For MEPs, the vote was the successful culmination of a tussle between EU institutions to reinforce MEPs’ prerogative to have the last say on the appointments.

They scuppered three of VDL’s nominees and then, having made their point, nodded through three scarcely less controversial subs. Still, the result is a commission that represents a remarkable balance in key senior vice-presidencies between the main pro-European parties – the Greens, to their chagrin, excepted – and geographically. And it has a higher proportion of women than any previous commission.

VDL bent over backwards to accommodate MEPs, even renaming some posts to reflect sensitivities; the controversial migration job changed from “defending” the European way of life to “promoting” it. That puts political capital in the bank, she will hope, and she will need every bit of support in some of the battles ahead.

Not least on the fraught budget (MFF) talks, which need to be completed by next summer if 2021-27 programmes are to begin on time. MEPs are the budget authority, as parliament president David Sassoli pointedly reminded VDL on Wednesday, and they are broadly on the same page as the commission in terms of ambition for the MFF. Member states, which come up with the cash, are not merely on a different page at the moment, but reading from a different book.

Central to maintaining the alliance with parliament will be VDL’s emphasis on climate change as her top priority and on the “European Green Deal” package due within weeks.

Crucial to making the case to member states to dig deeper is the commission’s insistence that the imperative of carbon neutrality can only be met if leaders agree substantially to raise spending and to back her mainstreaming of climate measures through the budget, from agriculture, to research, to investment and trade.

VDL heads off to speak to the global climate summit (COP25) in Madrid on Monday, her first task on her first day. For member-state leaders, the new commission represents the turning of a page in the EU’s history. They hope the new executive will be able to redirect its attention and energies from Brexit to issues such as climate change, migration and the digital economy.

“Get Brexit done” is muttered in the corridors of continental capitals as much as it is in the UK, but no-one doubts that even if Boris Johnson wins re-election and gets a majority for his withdrawal agreement, the commission faces a Herculean task in first agreeing a mandate between the 27 and then launching at least eight strands of discussions with the UK on their future relationship.

1 David McWilliams: ‘Ireland is three decisions away from being a perfect country’
2 Travel rules unlikely to include mandatory quarantine or cancelled flights
3 California shuts down again as US coronavirus cases surge
4 US passengers fly into Dublin: ‘I’m here for six days. I guess I’ll have to stay inside’
5 ‘It’s not normal to go to the toilet 15 times a day’
Real news has value SUBSCRIBE