The Irish Times view on powersharing in Northern Ireland: one more push 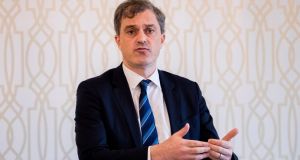 The UK’s secretary of state for Northern Ireland, Julian Smith, has shown a commendable commitment to his responsibilities since taking over the position in July. Photograph: Liam McBurney/PA Wire

The announcement that new talks aimed at restoring the Stormont Assembly will begin on December 16th presents a definitive test of whether the Democratic Unionist Party (DUP) and Sinn Féin are truly committed to the restoration of the powersharing administration in Northern Ireland.

Both parties have publicly welcomed the move, but whether they are seriously committed to reaching agreement will not become clear until the talks get underway in the aftermath of the UK general election. The outcome of that election could have implications for the two big parties in the North, particularly if gains are made by the three smaller parties which will also have a role to play in the talks.

Northern Secretary Julian Smith has shown a commendable commitment to his responsibilities since taking over the position in July, and it is to be hoped that his determination to make politics work in the North will have the desired impact on the parties whose disagreements led to the suspension of the Stormont executive.

“We can’t let this run and run, we have got to get this sorted,” Smith said when announcing the resumption of talks. He added that the number of issues to be resolved to bring back powersharing was “relatively small”.

One of the things that should concentrate minds in the DUP and Sinn Féin is the fact that if a deal is not done by January 13th, new Assembly elections will have to be called. The legislation that allows civil servants in Northern Ireland to take political decisions in the absence of an Executive will come to an end on that date.

There are a range of issues, particularly in health and education, where an executive should be making the key decisions. Smith and Tánaiste Simon Coveney have been working behind the scenes to try to persuade the parties to settle their differences on issues such as an Irish language Act. However, genuine progress in the North requires more than the restoration of an executive and assembly – it is dependent on a political commitment to move beyond narrow tribalism.

1 Are we really facing the death of the office?
2 Gardaí cannot prosecute people who breach midlands movement restrictions
3 10 upgrades that will add value to your home and 5 that probably won’t
4 New Zealand marks 100 days without a case of coronavirus
5 German nudist chases wild boar that stole laptop at Berlin lake
Real news has value SUBSCRIBE