Irish Times view on end of conflict between Ethiopia and Eritrea: a message of hope 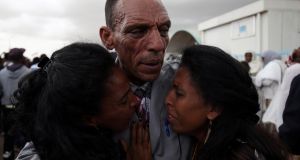 Adisalem Abu, reacts as he embraces his twin daughters, after meeting them for the first time 18 years, at Asmara International Airport in Asmara, Eritrea. Photograph: Tiksa Negeri/Reuters

From the Horn of Africa there comes a message of hope as decades of conflict between Ethiopia and Eritrea come to an end. This week the long-standing Eritrean leader Isaias Afwerki travelled to Addis Ababa to reopen their embassy. He and the new leader of Ethiopia Abiy Ahmed welcomed the rapid progress made in establishing travel and communications across the border closed for 20 years in a brutal war that killed up to 100,000 people. Peace between the two states could transform conditions for neighbouring Djibouti and Somalia and set a precedent for other conflicted African regions.

Abiy, a 42-year-old former army officer, came to power in April through the ruling party and embarked on a radical programme of reform. He addressed crowds of protesters previously harassed by the regime, apologised for that and released many from jail. Dissident media have resumed publishing, a state of emergency was lifted and last month the government announced it accepts a peace arbitration from 2000 that would end the war with Eritrea, hand over disputed territories and pave the way to allow landlocked Ethiopia use Eritrean ports. Euphoria and relief have greeted these announcements in both countries.

Economic reforms have followed including privatisation and selloffs of state companies to relieve debt and fund investment. That is badly needed for Ethiopia’s near 100 million population, with two million extra young people looking for jobs every year. An ambitious market reform programme is planned, in harness with international agencies and regional powers. Gulf and Saudi finance may follow, partly in competition with Chinese infrastructural investment which has shaken up markets.

Difficulties to come will include delivering on the border settlement and ensuring follow through on political and economic reforms. Given that refugees from much smaller Eritrea’s repressive regime have swollen the ranks of those seeking a better life in Europe in recent years, it makes great sense for European states to encourage and support these remarkable changes.