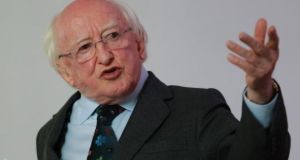 Sinn Féin confirmed in recent days it will field a candidate to challenge Michael D Higgins in the presidential election. Photograph: Nick Bradshaw

The announcement by Taoiseach Leo Varadkar that Fine Gael may facilitate the entry of more candidates into the race for the presidency is a strange development that calls into question his earlier expression of support for President Michael D Higgins. Only last week the Taoiseach said that not only would Fine Gael support the candidacy of the incumbent for a second term but that the party would consider making a financial contribution to his campaign. Now Varadkar is suggesting that Fine Gael may allow party councillors to facilitate the entry of other candidates into the contest. This is sure to encourage the efforts of a number of people currently expressing interest in running for the office.

To get a nomination a candidate must have the support of 20 members of the Oireachtas or four of the State’s 31 local councils. In 1997 and 2011 a number of candidates made it to the ballot paper by obtaining nominations from four councils.

The Taoiseach’s intimation that Fine Gael councillors will not be stopped from nominating candidates has come as welcome news to the growing number of potential candidates considering their options. It comes in the wake of a similar move by Fianna Fáil leader Micheál Martin. He also backed Higgins and said initially that this was the party’s view from top to bottom. After a party national executive meeting this position was modified and Fianna Fáil councillors freed to back the entry of other candidates into the race.

The attitude being taken by the leaders of the two biggest parties may simply reflect the fact that they cannot control the actions of all of their councillors but it also raises questions about the depth of their support for President Higgins.

At this stage it is impossible to know how many candidates will ultimately end up on the ballot paper for the election which is expected to take place at the end of October but all the indications are that it is going to be a lively affair with a number of candidates nominated.

Higgins will have to walk a fine line in continuing to perform the functions of his office while campaigning for a second term.