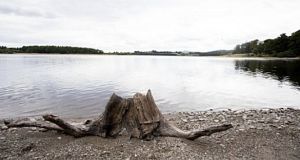 Low water level at Blessington Lake. The effect of this extended dry spell are already being felt, particularly in Dublin where supply in some areas has been restricted to little more than a trickle from 10pm to 5am. Photograph: Tom Honan

It has taken a parched country for politicians in Leinster House to wake up to the precarious state of Ireland’s water resources. After one of the longest spells of hot dry weather in several decades, broken only by moderate rainfall in recent days, the impacts are already being felt, particularly in Dublin where the supply of water in some areas has been restricted to little more than a trickle from 10pm to 5am. The Restaurants Association of Ireland has even demanded that water tankers should be provided to ensure that some 3,500 restaurants serving the city’s “night time economy” can continue to operate.

Apart from issuing repeated appeals to households to reduce their usage of water and imposing a hosepipe ban, the Government is now looking to the future with its decision that Irish Water should become a fully fledged semi-State company, no longer under the wing of Ervia, the randomly named entity that also houses Bord Gáis Networks. That’s what should have been done from the start, just as it was in 1927 when the Electricity Supply Board was set up to oversee development of the Arnacrusha hydropower station on the river Shannon and take charge of the supply of electricity, ultimately to every home in the State.

Instead, the legislation establishing Irish Water was rushed through the Oireachtas so that household meters could be installed to monitor water consumption. Latent discontent over the Fine Gael-Labour coalition’s austerity programme erupted into huge public protests, encouraged by populist politicians on the left, prompting Fianna Fáil to abandon its previous policy on water charges, and the whole enterprise turned into a shambles even as its principal author, then minister for the environment Phil Hogan, was departing for Brussels to become the EU’s agriculture commissioner.

Plans approved by the Cabinet last Thursday envisage that Irish Water will become solely responsible for the production, distribution and monitoring of drinking water and for the provision of sewage treatment plants – from 2023 onwards. This long lead-in time is intended to allow for likely tortuous negotiations over the transfer of some 3,000 staff from local authorities to Irish Water. It is suggested that the move could save €70 million a year. Certainly, there must be no repetition of the failures involved in merging nine health boards to create the bloated Health Service Executive in 2005.

As for the long-term need for major investment in water infrastructure, “the drought has changed the public mood”, said Green Party leader Eamon Ryan, while leading geographer and climate change expert John Sweeney also believes that “our experience this summer has been a chastening one” and that Ireland’s new vulnerability to water scarcity is likely to become more severe in the years ahead as a result of global warming.

1 Transgender Cork farmer (65) surprised at positive response to telling her story
2 Bobby Storey: The IRA's planner and enforcer who stayed in the shadows
3 Storey funeral a reminder that IRA army council runs Sinn Féin
4 Q&A: How close are we to having a Covid-19 vaccine?
5 Patrick Freyne: You endearingly sentimental sociopath, I’ve just the show for you!
Real news has value SUBSCRIBE