Europe must change its attitude to Africa to address migrant crisis 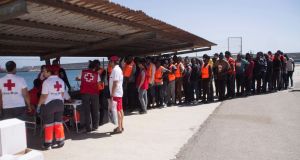 “Concerning the situation internally in the EU, secondary movements of asylum seekers between member states risk jeopardising the integrity of the Common European Asylum System and the Schengen acquis. Member states should take all necessary internal legislative and administrative measures to counter such movements and to closely co-operate amongst each other to that end.”

This item from last week’s European Council conclusions encapsulates many of the contradictory issues in Europe’s rapidly developing migration crisis. Since then its second sentence encouraging members to “take all necessary internal legislative and administrative measures to counter such movements” – an effective renationalising of common rules – was taken to heart by Germany, Austria and Italy. This confirmed the fear expressed in the first sentence that the free movement initiated at Schengen in 1985 alongside the European Union’s single market, could be jeopardised.

As many commentators point out, the numbers of refugees coming to Europe from the Middle East and Africa has dramatically reduced since 2015, highlighting the delayed reaction to this issue in national and European politics.

A collapse of trust by fearful citizens in the capacity and willingness of political leaders to restore orderly procedures and policies on migration underlies the success of anti-immigration parties in Italy, Germany, Austria, Slovenia and Hungary.

A further paradox is highlighted in a research paper from the Central European University in Budapest by Vera Messing and Bence Ságvári. Using survey data from the European Social Survey of 20 countries in 2014-15, they show that trust is the most significant factor explaining attitudes towards migrants.

Trust in fellow citizens and in institutions such as parliaments, political parties, the judiciary and police are central to the feeling of safety that allows acceptance of and solidarity with migrants. Where this is weak citizens are prone to anti-migrant hatred.

Strikingly that has little to do with actually encountering migrants, they conclude: “Countries with a negligible share of migrants are the most hostile, while countries where migrants’ presence in the society is large are the most tolerant.”

Ireland is an outlier in this study, with a relatively high 21 per cent of people saying nobody should be allowed to live here from poorer countries outside Europe. That bears out findings of the survey on racist hate crime published this week by the Irish Council for Civil Liberties. Despite the greater number of immigrants living here and the absence of a racist party underlying hostile attitudes need further research.

The research needs updating to take account of the 2015 surge of Syrian and related immigration which provoked these delayed political reactions throughout Europe.

The pace and scale of these reactive events has passed the political initiative to the far-right now led at European level by Matteo Salvini, leader of the Northern League and now the country’s interior minister. He has allies in those other countries and is egged on by Donald Trump from Washington.

Significantly that puts a weakening Angela Merkel and the bolder Emmanuel Macron on the defensive in this contest. Macron without Merkel would be significantly isolated.

In that perspective the deal reached by last week’s summit, combining action on external and internal borders and longer-term policies towards Africa in an effort to address pull and push factors affecting immigration, looks like a fragile and short-term compromise. Its logic aims more at a fortress Europe than the partnership approach with neighbouring regions articulated in calls for a Marshall plan for future African development.

Increasingly securitised and racialised internal and external borders dealing with asylum seekers, backed up by internal holding camps and external disembarcation platforms working with third countries, fill out this agenda.

It has been sharply and justifiably criticised by NGOs such as Oxfam and Médecins Sans Frontières for forcing victims of persecution back into the hands of the Libyan gangs running existing camps there.

Only a small proportion of Syrian and African refugees try to come to Europe, compared to those accommodated in Turkey, Jordan, or Lebanon or sub-Saharan neighbours.

The longer term and more progressive vision of a more equal and better resourced African development partnership with Europe is strongly supported by Ireland. It would draw on long-standing development policies towards the continent and take account of investment, trade and economic opportunities there, for example, in energy, education and agriculture.

Prudential anticipation of demographic change which could double the African population over the next century drives that approach, giving it potential appeal to both sides of Europe’s polarising immigration debate.