The Irish Times view on the Heritage Bill: the case for a new vision 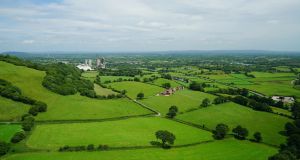 Agricultural lobbies, whose votes the Heritage Bill is clearly designed to attract, have contended that farmers need more flexibility in the management of their land. Photograph: Enda O’Dowd

The passage of the Heritage Bill through the Oireachtas marks the conclusion of yet another frustrating national dialogue of the deaf about nature conservation.

The Bill gives the Minister for Heritage discretion to extend the uplands burning season by a month, to March 31st, and permit hedge-cutting a month earlier, from August 1st, under certain circumstances, and conditional on existing conservation provisions for protected fauna and flora.

The conservation NGOs have argued passionately against these changes. They say the Bill will, in practice, speed the already alarming loss of habitat and decline in birds and plant populations in our countryside. Underlying their case is a lack of confidence that ministers will exercise this new discretion wisely, or pay any real attention to the conservation provisions. Sadly, history suggests that this concern is well founded.

Agricultural lobbies, whose votes the Bill is clearly designed to attract, have contended that farmers need more flexibility in the management of their land. They have questioned, sometimes flying in the face of science, whether spring burning and earlier hedge-cutting threaten breeding species. They do, however, have a point when they say that farmers sometimes know more about how to conserve the biodiversity of their home places than do regulators.

The argument for earlier hedge-cutting has been defended on the grounds of road safety. But existing legislation already permits cutting where there is any public danger from vegetation. The conservationists do not trust government because our record in this field is, bluntly put, a national disgrace. The failures of successive governments are damaging our wellbeing and our medium and long-term economic prospects. The National Parks and Wildlife Service states that 91 per cent of our internationally important habitats are in bad or inadequate condition.

Yet the conservation groups also need to question why their arguments fail to find sufficient public traction. One reason has been the demonisation of farmers by urban “greens”. While this has diminished, its echo can still be heard in the title of the campaign against the Bill, ‘No more slash and burn’. This whole debate needs to be reframed. The human communities living in many of our most valuable habitats are under severe pressure. Most farmers do care about our environment, but bad economic incentives are driving them to damage the landscape.

A new vision is needed, whereby farmers and rural communities are properly rewarded as the stewards of the healthy landscapes on which we all depend. Good models already exist: the Burren Farming for Conservation Programme, and the Native Woodlands Scheme, among others, show ways forward. The Government should resource them adequately, and extend them.