Naval Service does not send migrants back to camps in Libya, Government says 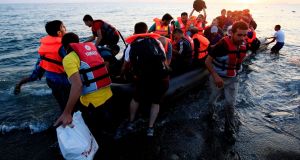 In recent weeks NGO search and rescue activity has ceased in the Mediterranean under pressure from EU governments. Photograph: Jonathan Brady/PA Wire

The Government has said that the Irish Naval Service does not return migrants it rescues from the Mediterranean to Libya, following accusations by a leading charity that Operation Sophia, the EU naval operation against people smugglers, is helping return migrants to camps where rape, torture, slavery and murder are rife.

A spokeswoman for the Department of Defence said: “Persons rescued by Irish Naval vessels participating in Operation Sophia are not returned to Libya, but are brought to an Italian port.

“In accordance with the mandate for the mission, the Naval Service can be involved in surveillance and intelligence gathering operations, search and rescue operations and disposal of migrant boats and force protection operations,” she said.

The Government’s statement comes after representatives from the charity Medecines sans Frontieres (Doctors without Borders), which operates a rescue vessel in the Mediterranean, attended at the Oireachtas Foreign Affairs committee on Thursday, where they said that the EU mission was assisting the Libyan coastguard to return migrants to camps where grave human rights abuses were routine.

The Libyan coastguard, supported and assisted by the EU, is returning vulnerable migrants to conditions where they are subject to rape, torture, slavery and murder, MSF says. The Irish naval vessel the Samuel Beckett is part of Operation Sophia.

The Naval Service having previously been engaged solely in search and rescue operations in the Mediterranean last year joined Operation Sophia.

But MSF says that the Libyan coastguard returns people to inhumane conditions in camps from where they often return to the traffickers’ boats a second or third time.

Aoife Ní Murchú, an Irish nurse who works with migrants for MSF in the Mediterranean and who spoke to The Irish Times on Thursday from Marseilles, said that “every single person who was returned to the camps says they are victims of further abuse – torture, sexual abuse, forced prostitution, forced separation of families”.

She described horrific accounts of life in the camps given by migrants rescued by MSF. Ms Ní Mhurchú said that the fact that migrants keep returning to attempt crossing suggests that the coastguard co-operates with people smugglers.

“Operation Sophia is one which is essentially designed to prevent people from reaching safety in Europe. It supports efforts of Libyan coastguard to intercept people instead of rescuing them. It supports a system which keeps people in dangerous, harmful and volatile environments where people are subject to violence and exploitation.

“Operation Sophia is essentially one that supports a system which creates immense suffering,” she said.

In recent weeks, NGO search and rescue activity has ceased in the Mediterranean under pressure from EU governments. At last week’s European summit Taoiseach Leo Varadkar was critical of some NGOs operating in the Mediterranean, suggesting they were encouraging the people smugglers.

Speaking in Limerick, the Fianna Fáil leader Michéal Martin said: “I have great respect for Médecins Sans Frontières, and if they are making accusations of this kind, they have to be taken very seriously.

“If [the Oireachtas committee] recommend, or they are satisfied that, there is something wrong there, we certainly don’t want to be part of returning anybody to a situation where they are going to face rape, and assault, and abuse,” Mr Martin said.