Health errors treated as ‘ingrained cover-ups’ rather than open communication 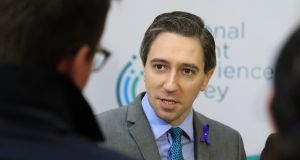 Minister for Health Simon Harris: “Paternalism” and “offensive nature” of some doctors’ comments to women with cervical cancer, as relayed in the Scally report, resonated with him. File photograph: Nick Bradshaw

No area of society escapes responsibility for the mistakes made during the CervicalCheck controversy, according to Minister for Health Simon Harris.

The Government, political system, health services, medical profession and the media all have lessons to learn from what happened, he said.

Having personally erred himself, one of the things he had learned was the need to cultivate an environment where people felt freer to acknowledge their mistakes, he said.

“We still live in a society where admitting a mistake is often seen as a sign of weakness. It is time we saw it as a sign of leadership.”

Mr Harris was speaking at a conference organised by the Royal College of Physicians of Ireland on learning lessons from the Scally inquiry into the CervicalCheck controversy, which was not open to the media.

Open disclosure and learning lessons must become embedded in the process of dealing with errors “more often than not,” he said.

However, the way in which the political system and the media react has not yet evolved, and this posed a real risk to the health service people wished to create.

“The tendency is still to treat such processes as revelations, unearthed from some culturally ingrained cover-up, rather than because the system is openly communicating.

“It smacks of rank hypocrisy if we demand that doctors should disclose and then sensationalise honest errors and demonise those who make them.

“These reactions risk public panic and reinforce suspicion and distrust. They may in fact deter the very candour we are all working to encourage.

In the CervicalCheck controversy, an early attempt to demonstrate leadership and provide a clinical interpretation, “met with such hostility that it drove a complete retreat until recently. The shutting down of certain voices and the uncritical amplification of certain vested interests meant a balanced narrative could not prevail.”

Mr Harris said the “paternalism” and “offensive nature” of some doctors’ comments to women with cervical cancer, as relayed in the Scally report, resonated with him.

“Paternalism may be too weak a word for the embarrassment, hurt and alienation women feel when they have such experiences with their doctor.

“Very often, the attitude is dismissive as much as offensive, and harks to a not so distant past when women’s health was somehow lesser, subordinate to her reproductive role.”

However, it was time to break with this past and there could be “absolutely no ambiguity” about informing patients of serious adverse events.