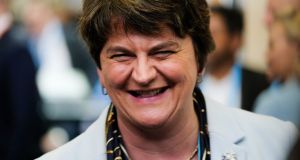 DUP leader Arlene Foster: The party’s response to the inadequacy of its arguments is to point the finger of blame at the grieving party on the other side. Photograph: Ian Forsyth

For a short while there, it looked seductively like the compromise that we have all been waiting for. From denying the possibility of any post-Brexit divergence within the United Kingdom, the DUP moved last week to endorse the proposal of a regulatory border down the Irish Sea for “all goods including agrifood”. The toxic backstop jettisoned in favour of an all-island regulatory zone. In even proffering the concept of an island of Ireland solution, the DUP looked to be attempting an athletic about-turn.

If they wished, they could justify it in terms of their previous (and periodically disremembered) demand for Northern Ireland-specific arrangements, now writ large in bold bright colours. But what has been curious is that this has barely been attempted. Instead the DUP leadership has moved rapidly towards attributing blame, and far from the cautious, harmonious timbre normally associated with selling a compromise.

6 Beyond the guidelines: How not to get Covid-19 this weekend

7 Coronavirus search: See how Covid-19 is spreading in your area

8 Behind Her Eyes: Eve Hewson could have found star-making role in Netflix thriller

10 Stephen Collins: Trump values appear set to prevail in Irish politics at the next election

11 Gardaí make arrest after woman is seriously assaulted in Dublin

17 ‘Doug and Kamala together are almost vomit-inducingly cute and couply’: The VP’s stepkids speak

18 Has Eddie O’Connor underestimated the value of his €1bn baby?

26 Covid-19: Current travel rules ‘will not stop’ all cases coming into State – Glynn

27 Cold and working from home? How to stay warm without whacking up the heating

31 Hungary buys Sputnik vaccines for 1m people, saying EU has been ‘too slow’

32 ‘I should be feeling despondent. I don’t’: Chefs dish up the truth about life in lockdown

37 Covid-19: Nphet warns of a ‘large number’ of deaths in coming weeks