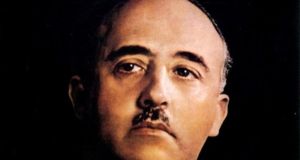 Franco won the Civil War only with the help of Hitler and Mussolini. Yet he remains honoured by some Spaniards who claim to be democrats today.

“Today we are closing a dark chapter in our history,” the Spanish prime minister, Pedro Sánchez, said last month.

He was welcoming a unanimous judgement by the Spanish Supreme Court, which endorsed his government’s right to remove the body of Gen Francisco Franco from its place of honour in the Valle de los Caídos. This is a grotesque monument to the former dictator’s 40-year reign of state terror. Sánchez claims that the removal is the final symbolic step in Spain’s transition to democracy.

The surprising thing is that it has taken Spanish democracy so long – four decades after Franco’s death – to seriously consider removing Franco’s remains from such a prominent site of far-right triumphalism.

The Valley of the Fallen lies a few kilometres northwest of Madrid, topped by what is claimed to be the tallest cross in the world.

Franco claimed that the mausoleum, which includes an active monastery, was a monument to reconciliation among Spaniards after the bloody civil war he had initiated in 1936. But it was built by the forced labour of prisoners who had fought against Franco in defence of Spain’s democratic Second Republic. The remains of many thousands of their comrades were exhumed from across the country and piled up in vast anonymous galleries in the valley, alongside their enemies, without the permission and often without the knowledge of their families.

Franco won the Civil War only with the help of Hitler and Mussolini. Yet he remains honoured by some Spaniards who claim to be democrats today. In contrast, it is inconceivable that German or Italian democrats would tolerate such a monument to their respective dictators, just outside their capitals.

But Franco had been cunning enough to remain neutral in the second World War, and his regime was accepted as a cold war ally by the US.

When he died in 1975, his supporters remained powerful enough to persuade most of the democratic opposition, including Sánchez’s Socialist Party (PSOE), to accept a “pact of forgetfulness” as a problematic condition of Spain’s transition to democracy. This pact protected prominent regime figures from legal consequences for their crimes against humanity.

The pact also, and shamefully, left tens of thousands of Republicans dead in hundreds of unmarked graves, while it preserved many monuments to fascism, and kept the dictator undisturbed in his ostentatious tomb.

Only in 2007 did the Spanish parliament finally pass a law of historical memory, which expedited the disinterment and identification of some of the Republican dead, and the removal of some far-right monuments. But it has taken another decade for a Madrid government to move towards exhuming Franco, in the teeth of fierce resistance from his family, from the abbot of the monastery and other elements in the Catholic Church, and the explicit or implicit opposition of most of the Spanish right.

“We must look to the future. I’d rather think about the Spain of my children than that of my grandparents,” Pablo Casado, leader of the right-wing Partido Popular (PP), said last week. He had previously said that he would not “waste one euro” on exhuming the dictator.

The outgoing papal nuncio commented earlier this year that the exhumation was only bringing old enmities back into play.

Since much of the Catholic hierarchy had been closely entwined with Franco’s regime from the outset – admittedly provoked by anti-clerical atrocities by extremist Republicans – his remarks were, at best, disingenuous.

Nevertheless, the point that erasing historical monuments and digging up the dead can have unintended consequences deserves consideration. Our own republic has been very circumspect in this area; for example, we have left the portraits of British lords lieutenant hanging in Dublin Castle. We barely notice them, but their presence there was a salutary surprise for some unionists when they first saw them during the peace process.

The removal of Confederate memorials in the US south remains highly controversial. The 1990s wars in the former Yugoslavia were preceded by the opening of mass graves reminding citizens of massacres in the 1930s and 1940s.

Nothing like that is likely to happen in Spain, but exhuming Franco is an especially tricky exercise right now. Spanish politics has been sharply radicalised and fractured by the financial crisis and the Catalan independence movement.

On the left of Sánchez’s PSOE, this fracturing has produced Podemos, a party that makes strong arguments for rejecting the compromises of the transition to democracy. Meanwhile, even the PP has proved insufficiently right-wing for many Spaniards. Its supporters are now split between three parties. One of them, Vox, explicitly honours the Franco regime. The ground for a revival of the far-right has been prepared by a cabal of “revisionist” historians who, quite perversely, argue that Franco somehow saved Spain for democracy.

And Sánchez is in a weak position to carry out such a dramatic move. He has been culpably arrogant in failing to reach a coalition deal with Podemos that could have given Spain a reasonably stable government of the left. Instead he has plunged the country into a fourth election in as many years. Exhuming Franco just before the November poll could well give a boost to Vox, and put this repugnant party in a position to dictate terms to a new hard-right government.

Friends of Spain must hope that digging up Franco’s body does not stimulate a resurrection of his vile ideology.