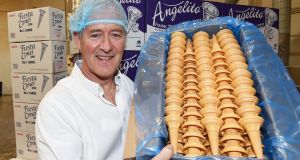 Neil Doherty: ‘I couldn’t believe it when I heard it.’ File photograph: Trevor McBride

Buy an ice cream anywhere in Ireland and chances are the cone was made in Neil Doherty’s factory in Derry.

Four out of every five ice cream cones sold on the island are either made or supplied by Wafer Ltd from its base at Skeoge, just half a mile from the Border with Donegal.

Its principal product, the cones, are made using flour from the UK though the wheat may come from the EU or Canada. Some cones are imported from Germany, are hand dipped in chocolate and covered with toppings in Derry before being dispatched both sides of the Border. Sweets made in Spain and Belgium are repackaged for convenience store chains in the Republic.

They haven’t been listening to anything at all

The suggestion, reported by RTÉ on Monday evening, that there would be “customs clearance centres” – effectively customs posts – five to 10 miles back from the Border as part of UK proposals to avoid the backstop was met with horror by Doherty.

“I couldn’t believe it when I heard it. I thought, ‘is this real?’ They haven’t been listening to anything at all.”

Though British prime minister Boris Johnson has dismissed the plan – telling the BBC this was a previous idea and Britain would make a “very good offer” to the EU soon which did not involve customs posts – on Tuesday there was widespread concern among the business community and those living along the Border.

“It’s marooning Derry,” says Jennifer McKeever. “It would be like the wild west.” A former president of the city’s chamber of commerce, she runs the airport transport business Airporter. “It is totally unacceptable. There is no version of this that allows us to continue to trade or to live in the way that we do now. It would disrupt our very way of life.”

She admits to finding it shocking and “pretty heartbreaking”.

“It demonstrates a complete lack of interest [by the British government]. There have been thousands of hours of engagement between business organisations in Northern Ireland with Dublin, Brussels and with the UK government, all of which was done in good faith. And for the British government to turn round now at one second to midnight and say this is their starting position for negotiations is breathtaking.”

Current chamber president Brian McGrath of Foyle Port says “we have been relying on the [British] government to deliver on frictionless trade. If these reports are true, then this is as far removed from frictionless trade as you can get and it looks like the government is backtracking on its commitments.”

Another former chamber president, George Fleming of manufacturing company Fleming Agriproducts, says “a border is a border. It doesn’t matter where it is. It’s still a clearance station where you would have to go and stop with your goods, it’s still a delay, it’s still an issue, and it’s totally contrary to the Good Friday Agreementshould be no Border posts, no demarcation on the island of Ireland.”

He is in no doubt such a proposal would lead to violence. “We’ve got so used to living in peace,” says Fleming. “And dealing with ‘normal’ criminality as opposed to what went before. People here just want to get on with our lives.”

In the 3½ years since the Brexit referendum, Doherty has been preparing. He has leased premises in Donegal; if there is a no-deal Brexit, he will move his packaging operation for the Republic of Ireland side of the business across the Border.

“I am more unsettled at the minute about Brexit than I have been at any time before. We have to hold on to the belief that this is sabre rattling,” says McKeever. “The easiest solution is for the UK government to get a deal by giving Northern Ireland a NI-only backstop. We have to hope that this is the last play before that is accepted.”