Diarmaid Ferriter: Government needs to smell the daffodils in December 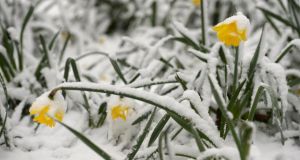 Taoiseach Leo Varadkar said last year any form of carbon tax would have ‘totally wiped out’ tax cuts in the budget because we were ‘heading into winter’ Photograph: Dara Mac Dónaill/The Irish Times

President Michael D Higgins rightly hailed the innovative and ambitious young Irish scientists during the week, not least because of their engagement with the problem of climate change.

He suggested “we have many young people in this country who promise to become the problem-solvers, critical thinkers, and persistent learners that are so essential to the crafting of a shared and better future for all who share this fragile planet . . . no responsible policy can afford any longer to ignore environmental issues”.

Of the 550 projects put forward at this year’s young scientist exhibition, 88 deal with climate change and environmental issues and on foot of this the president felt he could express optimism that the future of Ireland was in safe hands.

It was a deserved tribute, but by the time these young scientists get their hands on the levers of change and power it might well be too late and our government- more advanced in years but by and large still young – is not doing nearly enough politically to match the priorities of the more youthful trailblazers in the RDS.

Last month, Minister for Foreign Affairs Simon Coveney was asked by journalists if Ireland’s record as Europe’s worst performer in tackling climate change will damage its chances of winning a seat on the UN Security Council, a major foreign policy priority for the current government.

Kenny gave a separate media briefing to Irish journalists  and said that, in truth, tackling climate change was 'not a priority' for his government

He replied that the government will unveil a climate action plan before the UN vote in 18 months “which will improve Ireland’s international reputation” for implementing environmental safeguards: “Ireland needs to make the transition from where we are today on climate change, which is not good enough, to introducing a plan that delivers on the targets we are setting for ourselves and changes the way in which the government is perceived on climate”.

Unpicking these assertions is a depressing exercise that should engender justifiable cynicism. It is more of the same blather we have been hearing for a long time now; talk of “transition” and “plans”; posturing in order to appear to be aspiring towards change instead of aggressive, current policy making, despite the fact that it is now 30 years since climate change first generated widespread international coverage under the label “Global Warming”.

It is also a century since the beginnings of Irish foreign policy; in January 1919 the first Dáil sent greetings to the international community in its Message to the Free Nations of the World asserting its right to “vindication at the Peace Congress” to settle the post-war international order.

There were, it seemed, far more important things to be doing, like making the Irish economy great again

Following that, its first international step was to send a group to the Paris peace conference to lobby for recognition of the Irish Republic.

It did not succeed, but it did continue to press the case internationally for the right to self-determination.

If only the government now marked the centenary of the beginnings of modern Irish diplomacy with a similar, serious focus on climate change given that it is the most pressing issue of our time, rather than seeking to just allude to the issue when convenient, then cynically seeking to wriggle out of it, as was the case in recent years when Ireland aligned itself with Poland and Lithuania in lobbying to reduce the ambition of EU emissions reductions targets

In his new book Climate Change, Politics and the Press in Ireland, David Robbins of the School of Communications at DCU notes that despite some tepid initiatives and announcements, the Irish political approach to climate change has been more about “calls and imprecations, of reports outlining the challenges of dealing with Ireland’s emissions rather than policies to actually reduce them”.

He also highlights the codology and disingenuousness witnessed in December 2015 when taoiseach Enda Kenny addressed the UN Framework Convention on Climate Change outside Paris and expressed hope that a binding, global agreement on reducing carbon emissions would be agreed: “This requires action by everybody – big and small. Ireland is determined to play its part”.

But at the same time, Kenny gave a separate media briefing to Irish journalists covering the event and said that, in truth, tackling climate change was “not a priority” for his government.

There were, it seemed, far more important things to be doing, like making the Irish economy great again.

This time last year following his speech to the European Parliament, current Taoiseach Leo Varadkar admitted he was “not proud” of Ireland’s record in tackling climate change; later the same year he wondered, after his government shirked the issue of a carbon tax in the budget, if it was “the appropriate time” to focus on this tax given Brexit, worries about general price increases, the fear that such a tax would have “totally wiped out” the tax cuts in the budget and because we were “heading into winter”.

That winter seems to have been inordinately delayed given the amount of daffodils that were blooming in Ireland over Christmas. I wonder why?

1 Stir-crazy Dutch holidaymakers set to descend on Caribbean island
2 Son putting elderly dad under pressure to sign over land
3 Covid-19: Museums, cinemas set to reopen next week as Varadkar warns of New Year restrictions
4 Alison Curtis: My guilt at not going for a second pregnancy
5 Miriam Lord: Unity and common purpose in spades but not for Covid fight
Real news has value SUBSCRIBE