Diarmaid Ferriter: Camogie has survived, but it has not triumphed

Unesco status for the game is welcome, but it remains shoddily treated compared with hurling 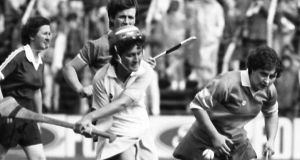 Dublin and Tipperary in the All-Ireland senior camogie final in 1984. Photograph: Eddie Kelly

In 1934, the National Athletic and Cycling Association suggested hosting a women’s 100 yards sprint as part of its national championships. In response, the Rev John Charles McQuaid, then president of Blackrock College, sent a letter to the national newspapers. He asserted, “Mixed athletics and all cognate immodesties are abuses that right-minded people reprobate, wherever and whenever they exist.” There was a simple, compelling reason for this, McQuaid declared: “God is not modern; nor is his law.” Women sharing sports arenas with men were “un-Irish and un-Catholic”, and would be participating in a “social abuse” and a “moral abuse”.

The 30-year-old Camogie Association supported McQuaid’s contentions. Seán O’Duffy, its organising secretary, announced the association “would do all in its power to ensure that no girl would appear on any sports ground in a costume to which any exception could be taken”.

By 1950, the focus had shifted from the costumes and “immodesties” to the health benefits of women playing sport. Retired professor of modern Irish in UCD Agnes O’Farrelly, who at the beginning of the century had argued successfully for co-education at UCD and presided at the 1914 inaugural meeting of Cumann na mBan, the female auxiliary of the Irish Volunteers, was adamant that, in relation to camogie, “this national game of ours cannot by any stretch of the imagination be called unwomanly or in any way unsuited to the dignity of our sex. We have had, time and again, the best medical opinion on the game and it is decidedly favourable . . . the players are better Irish women for having played the game, better citizens and in time they become better mothers for the race”. Numerous doctors, sportswomen and “games mistresses” supported her comments. The healthy “moral effects”, O’Farrelly concluded, were indisputable.

By 1950, the focus had shifted from the costumes and 'immodesties' to the health benefits of women playing sport

These camogie women were still, however, seen as a breed apart as they always had been. The GAA had been established with the intention that it would be open to “men of every class”. Women were not welcome and as Paul Rouse has outlined in his Sport and Ireland: A History (2015), it was members of the Gaelic League in Navan who in 1898 came together to play “ladies’ hurling”. Five years later, Dublin members of the Gaelic League devised a code of rules with the conventions of hurling amended in ways considered to make the game more suitable to women. The game was named camógaíocht, revealingly translated as “junior hurling” and “unique among the rules was one that cited as a foul the deliberate stopping of the ball with the long flowing skirts then fashionable with early players”. The Camogie Association was established in 1905 but it struggled to make headway. It was revitalised by the relaunch of the association in 1911 and, by the following year, camogie matches were being played regularly in each of the four provinces, but there was no unhindered upward trajectory.

Camogie survived, but this is not a story of triumph against many historic, hostile winds because camogie has not triumphed. By the end of the 20th century, the game grew to unprecedented popularity but, separately organised to the GAA, it was, like the Cumann na mBan of Agnes O’Farrelly’s era, decidedly subordinate. Camogie players are still the Cinderellas of Gaelic sport and their status needs to be highlighted not least over the decision announced last week that hurling and camogie have been granted special cultural status by the United Nations Educational, Scientific and Cultural Organisation (Unesco), a move widely welcomed as an important acknowledgment of the role Gaelic games play in Irish society and their uniqueness.

In truth, however, there is no equality between hurling and camogie and the purple prose of those who worship at the altars of the male hurling gods could do with being punctured by an acknowledgment of the disdainful treatment of camogie players.

Unesco notes that hurling is considered “an intrinsic part of Irish culture” as indeed it is, but camogie is not treated as such. Senior All-Ireland and Intermediate Club Championship camogie finals have been shunted to lesser grounds to protect the pitch surfaces for men; women have sometimes been reduced to getting changed in car parks and, earlier this year, Cork camogie captain Aoife Murray, a nine time all-Ireland winner, noted that the womens’ games are merely curtain-raisers to the mens’: “I have played senior camogie when we’ve opened up for under-21 hurling matches . . . I’m a grown woman and I have to open up for them. They’re the main stage!” Likewise, in last month’s RTÉ documentary The Big Picture: A Woman’s World, the Clare camogie player Chloe Morey compared her experiences with those of her cousin, hurler Séadna Morey, highlighting the gulf between support for men and women.

Those who have volunteered to keep the camogie show on the road have been showered with UN plaudits while having to make do with shoddy treatment and worse on their own doorsteps.