Diarmaid Ferriter: Thousands are still haunted by the conflict, but others view it as not ‘ours’ 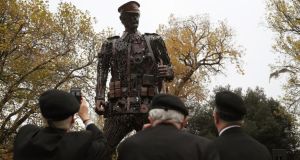 A giant soldier currently inhabits St Stephen’s Green in Dublin, and well he might, given that this weekend marks the centenary of the Armistice that brought the hideous First World War to an end. The Haunting Soldier, a 6m-high sculpture created and designed by Martin Galbavy and Chris Hannam, is attracting much interest, silent reflection, appreciation and, no doubt, some resentment at those who still baulk at the notion of that war as “our” war.

Thousands of Irish family histories are haunted by the war and it continues to provoke strong sentiment because of its horrendous scale and the ways it is memorialised, but there is also a greater appreciation now that the memory and sense of it is ill-served by the reduction of a multitude of personal experiences into neat parcels of affiliation or motivation.

A common narrative is that commemoration of the war was allowed to breathe in Ireland only as part of an island-wide “shared history” rubric facilitated by the peace process of the last 20 years. But it was never as simple as that and some of the currents that were evident in earlier commentary on commemoration in southern Ireland were subsequently misrepresented. Many nationalists in the 1920s, for example, did not object to remembrance but what they regarded as its hijacking. In 1927, leading figures in the new Fianna Fáil party spoke at a protest at College Green in Dublin to object to what Seán Lemass referred to as remembrance gatherings that “were utilised by a small section to display imperialistic sentiments”.

Lemass did not take issue with war remembrance but with the display of the Union Jack in the fledgling Free State and he specifically called on “nationalist ex-servicemen” to ensure that remembrance “was not used to insult people”. He had no objection “to any section of the people honouring their dead”. What he did not mention was that two of his cousins, Herbert and Edwin Lemass, had fought with the Royal Dublin Fusiliers and Herbert had been killed at the Battle of the Somme in 1916, a few months after the young Seán had fought in the GPO during the Easter Rising.

Éamon de Valera also asserted at the 1927 meeting that “nothing was more natural than that men should seek to commemorate the memory of comrades who fought side by side in battle” including the Irish nationalists who had fought for what they believed was the furthering of their own country’s liberation.

Those who fought belonged to the “generation of 1914” and were guided by many different lights; the great tragedy is that so many of those lights and the lives carrying them were extinguished, made all the more ruinous by the fact that it was optimism that propelled so many of them.

The correspondence between two brothers, Michael and John Moynihan from a prominent political family in Tralee, has been closely examined by historian Deirdre McMahon, who sees their correspondence as reflecting an impatience with what they regarded as the weakness and decadence of an older generation and the idea that they had been born into a world “lacking energy and fibre” which had led to international crisis. As McMahon points out, this not only prompted intergenerational tension but also a sense of “discontinuity and a tendency towards extremes: optimism, dogmatism and, ominously, the growing appeal of war as catharsis, as a form of national regeneration and renewal”.

A century on, people can reach their own conclusions about whose war it was

The older brother Michael, a well-educated civil servant, joined the Civil Service Rifles in March 1914 and was killed in June 1918, five months before the Armistice. Michael was a restless soul and deep thinker who as a young man suggested “heaven must be insufferably boring. Perfection means simplicity and simplicity means dullness.” Like so many soldiers, Michael had spared his family the squalid, bloody details of trench warfare. Before his departure for the front, John wrote to him: “I have an impression that you are not the sort of person to die young.” But he was, as were almost 200 men from Tralee.

Who knows what contribution he and they would have made to postwar Ireland? John Moynihan and another brother, Maurice, went on to have distinguished careers as public servants, working with, among others, Seán Lemass, who in 1966 came back to the subject of Irish service in the British army from 1914-1918 and sought, perhaps, to salve his conscience: “In later years it was common – and I also was guilty in this respect – to question the motives of those men who joined the new British armies formed at the outbreak of war, but it must, in their honour and in fairness to their memory, be said that they were motivated by the highest purpose.”

A century on, those gazing at Dublin’s temporary “haunting solider” can reach their own conclusions about whose war it was and what motivated those who were part of it.

1 ‘It was pitch black’ - Rescued teenager describes night afloat with her cousin in Galway Bay
2 Irish team wins international competition with dementia app
3 Coronavirus: 67 additional cases but no new deaths reported in the State
4 Tipperary mushroom plant suspends work as staff test positive for Covid-19
5 Coronavirus: We must save lives but we also need to live
Real news has value SUBSCRIBE