Mark War of Independence by reinstating history as core subject

State must ensure study of history does not become class-based 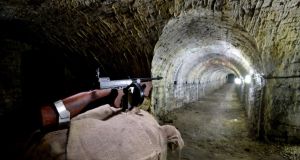 The Long Tunnel at the Casino at Marino in Dublin, which was used for target practice during the War of Independence. Photograph: Alan Betson

This month 100 years ago the Cork nationalist MP William O’Brien sent a letter to the press that was widely regarded as prophesying the downfall of the Irish Parliamentary Party.

He suggested it had nothing left to offer due to its “degenerate parliamentarianism”. Long a dissident in the party, O’Brien seemed to revel in its downfall the following month as Sinn Féin routed it.

He saw himself as representing the spirit of Parnell in a party that had abandoned Parnell’s legacy and its commitment to its grassroots and did not mourn its demise.

O’Brien believed Sinn Féin had earned its political pre-eminence. But Sinn Féin had much to figure out; its election manifesto had promised the party would abstain from Westminster but also seek to establish an Irish republic “by making use of any and every means available to render impotent the power of England to hold Ireland in subjection by military force or otherwise”.

What precisely that meant was unclear; indeed, much was in flux and undefined at the end of 1918. As Fr Michael O’Flanagan, one of the vice-presidents of Sinn Féin, commented after the election: “The people have voted Sinn Féin. Now we have to explain to them what Sinn Féin is.”

Historians will also have a lot of explaining to do in the coming years in trying to answer numerous, related questions: who and what did Sinn Féin represent?

Had the Irish Parliamentary Party’s record been unfairly traduced? Was there such a thing as a mandated military war of independence? What was the relationship between violence and politics and to whom was the IRA answerable?

What circumstances gave rise to the partition of Ireland and subsequently the Anglo-Irish Treaty and the Civil War?

The State faces interesting challenges in confronting all these questions and the extent to which they shaped modern Ireland and left legacies that continue to be played out as current affairs. So do all those active at local level in promoting history, remembrance and commemoration.

Much will understandably be made early next year of the centenary of the first Dáil but what fuss will be made of the Soloheadbeg ambush on the same day, regarded as the beginning of the military war of independence, and should the State have a role in commemorating the many other acts of violence of the years 1919-1923?

These questions are not just for the State or historians. The challenge to sustain a measured approach to commemoration is a communal one.

There should be public debate about a meaningful, considered State programme of commemoration, and a determination to resist hijacking of commemorations, and propaganda and selectivity masquerading as history.

We should also reject a suffocating, present-centred judgmentalism; what Richard Evans, the renowned Cambridge historian, has characterised as wishing a personality change on the generation of a century ago and “lecturing the people of the past on how they should have done better”.

Such contemporary impulses often arise during commemorations; what needs to be prioritised, however, is the primacy of contemporary evidence and sources. That task has been made easier by the avalanche of source material entering the public domain in recent years. The volume can also be overwhelming, and the evidence needs to be sifted, contextualised and allowed to breathe, as it was to considerable effect during the commemoration of the 1916 Rising two years ago.

There was a positive focus during that centenary on education and historical reflection and the State’s Ireland 1916 programme included a stated aim to “generate additional interest and enthusiasm for the revolutionary period” in the second-level history curriculum.

This, however, also highlighted an elephant in the commemoration room and a missed opportunity to reverse the plan to drop history as a core, compulsory subject for the Junior Certificate. Last week, the new Minister for Education, Joe McHugh, made a notable intervention when he announced that the status of history in the Junior Cert curriculum is to be reviewed.

The Minister now has an opportunity to rectify a serious mistake and if his initiative results in the reinstatement of history as a core subject at this level he will have done part of his job very well indeed.

It is imperative that the State ensures the study of history is not class-based. In 2011, the Ofsted report on history teaching in British schools, where history is compulsory only up to the age of 14, expressed concern “about the wide educational divide in this country when it comes to studying history . . . in affluent areas history is studied well and widely, whereas in many more deprived areas it has been neglected and ignored”.

There would also be nothing more ridiculous than the Irish State embarking on a series of commemorations to mark the War of Independence and Civil War and encouraging as much public engagement as possible with the past, while simultaneously permitting the downgrading of history in our schools.