Defacing statues is not all mindless, but it’s all still vandalism

If we were to remove statues and rename streets in Ireland, where might we start? 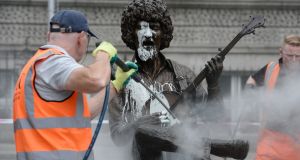 What do Luke Kelly and Edward Colston have in common? Kelly was a working class Dubliner, legendary singer, communist, folk hero. Colston was a merchant, philanthropist and slave trader. Kelly was a champion of the underdog; Colston branded slaves on the chest with his company’s initials.

Very little, in other words, besides their statues.

Three weeks ago, Edward Colston’s monument was knocked off its plinth and thrown into the river in Bristol. Earlier this week, two Luke Kelly sculptures were doused in white paint in an orchestrated act of . . . well, nobody has a clue.

As monuments to those who prospered through racism and slavery fall like dominos across Britain and the US, and right wing, Nazi-saluting thugs rush to defend them, we get paint in the face of Luke Kelly. An act so devoid of reason or ideology it could have been dreamed up by Waterford Whispers.

This isn’t the first time that monuments to the Dublin singer have been targeted: for one of them it’s the sixth in 18 months. Still, whoever was behind it, the timing of the latest concerted incidents is unlikely to be coincidental, as an outbreak of highly infectious statue-toppling sweeps the globe.

Some monuments need to be retired; some need additional context, a second plaque

The protesters in Britain and the US attacking the statues of everyone from Christopher Columbus to the fictional character Don Quixote to Ulysses S. Grant do at least appear to know what they are protesting, even if the targets of their ire are sometimes puzzling.

They are striking out against the veneration of what they see as problematic figures from history. They’re making a point about institutionalised racism, police brutality or, in the UK, the treatment of the Windrush generation and Grenfell survivors.

Still there is a thread that runs all the way from Colston to Luke Kelly: a finger up to the establishment; an expression of pent-up, locked-down, frustrated energy; a desire to be seen, heard, memefied. It’s not all mindless, but it’s all still vandalism – some of it is just a woker, more socially acceptable kind of vandalism.

The desire to excise painful moments from history has led Labour councils all over England and Wales to re-examine statues for links to slavery and plantation owners. The mayor of London, Sadiq Khan, said the capital’s street names and the names of its public buildings and plaques would be reviewed.

If the same process was undertaken here to remove statues and rename streets, where might we start? Not with poor old Luke Kelly anyway. What about the Berkeley Library in Trinity College which is named after George Berkeley, theologian and slave owner? Possibly. With the statue of Republican and Nazi collaborator Sean Russell, also defaced recently? Probably.

What then? The grottos to the Virgin Mary dotted around the country, reminders of a very Irish incarnation of slavery?

We’re nowhere near ready to have that conversation. There is little public appetite to divest our public spaces of the iconography of the Catholic Church.

There is still a deep-rooted cultural and societal attachment to the institution here, despite what the Ryan Report and Murphy Report revealed a decade ago. There’s also a recognition that – though it was responsible for the institutionalised abuse of children and enslavement of women – it couldn’t have done so without the helpful blind eye, if not all-out endorsement, of the State and the public. And even an ardent critic couldn’t claim that the influence of the Catholic Church in Ireland has been entirely malign.

Making sense of history requires being open to this kind of nuance. The response to a nation’s troublesome past shouldn’t be to obliterate it, to douse it in paint or throw it in the river. Some monuments need to be retired; some need additional context, a second plaque.

We need spaces for education and reflection on painful parts of our story, such as the long-awaited monument or memorial to Magdalene survivors on the site of the Sean McDermott Street Laundry.

The rush to topple statues and rename streets might offer a satisfying shot of self-righteousness, but it won’t leave Britain or America with anything to remind future generations, other than a sub-genre of statue toppling videos on TikTok or YouTube. It might not leave them with much to call streets either, because few of the world’s most venerated public figures are entirely morally infallible. Martin Luther King has a troubling record of his treatment of women. Thomas Jefferson might have held it as self-evident that all men are created equal, but he was a slave owner. Closer to home, Michael Collins was many things: one of them was calculated killer.

If the young American protesters really understood their history, how many monuments could they leave standing? Surely the real issue is that too many of them don’t. This was one of the complaints made by protesters at the Cecil Rhodes statue in Oxford. They were furious at how little of their country’s history they knew; how they were better acquainted with Henry’s VIII’s wives than Britain’s colonising past. The protests, they suggested, could change that. But you don’t need to look any further than Luke Kelly to see that viral videos of statues being vandalised sometimes just leads to more statues being vandalised.

The answer cannot be to sanitise our public spaces or rip pages from history books. Instead, it must be to protect history in all its complexity; make sure it’s taught properly and early in schools, and not just from the dominant white, male perspective.

We live in a time of much-needed reckonings. But it’s also a time when nuance and context are being lost. Contexts alter. Certainties change. Monuments from different eras can serve as a reminder of those changing values. No statue, or building name should come with a best before date of eternity. But applying the rules of cancel culture to the past is dangerous.