Sean Gallen: How long will you fight racism? 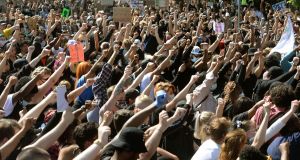 “It’s not enough to be non-racist, you have to be anti-racist.” This rousing call-to-arms penned by political activist Angela Davis draws a stark line in the sand; if you’re not fighting against systemic racism, you are complicit.

People were shocked and appalled by the brutal and racist murder of George Floyd and the subsequent turmoil. For many white people, this was a watershed moment, a point of no return; they had to contribute in some way.

As the Black Lives Matter movement continues to surge (even though the media is no longer covering it as extensively), will this newfound solidarity remain? Systemic racism will continue to be a hefty obstacle in the lives of People of Colour, but will you continue to attend demos, sign petitions, and engage with those around you?

Too many people treat systemic racism with the same shrug of the shoulders they give to climate change, shirking the responsibility and hoping the government will “take care of it”. The daily work of fighting for a more equal world must happen on a high level, in the legislature and beyond, but it also needs to happen on a person-to-person level.

It starts with calling out discriminatory behaviour around us, instead of being quiet, as well as looking at our own privileges and examining our own behaviour. It begins with a conversation.

When Green Party leader Eamon Ryan quoted from an article by me on the subject of the n-word in the Daíl, he was trying to have an important but difficult conversation on systemic racism, but his use of the n-word was unacceptable and disappointing.

These difficult and important conversations can be like minefields, your words can become incendiary and if you’re not careful, you can lose yourself and your cause in the explosion.

However, we must continue to navigate the rough terrain if we hope to get to the other side, where understanding awaits. People are afraid of saying the wrong thing, using the wrong term and it deters them from engaging and learning. We are also uncomfortable with, if not terrified of, the internalised racism that we all carry. If you don’t know what to say, then ask, listen and learn.

Irish people are masters of not talking about the elephant in the room. Our history is marked by our subjugation to an oppressive foreign ruler for centuries and we had to endure a lot of suffering in silence, through clenched teeth. In more recent history, we survived the Troubles and post-recession austerity with our wits intact. As a result, we are strong and resilient, but we can also find it hard to be vulnerable and talk about the thorny, complicated issues we find ourselves surrounded by.

While writing on personal experiences of racism in Europe, there were so many times a little voice in my head told me to “just leave it”. I didn’t want to open the can of worms that is racism and my personal experience as a PoC. Then I realised, I wasn’t the one who opened it; the same can of unresolved issues had been festering for too long.

The sheer complexity of systemic racism looms over each one of us like an unscalable mountain. It’s at once so vast and so microscopically embedded in the world that we struggle to imagine existing without it. At times, I doubt that I will see an end to the ever-expanding inequality in my lifetime, but it is up to all of us to strive to imagine a better future and push toward it with all our might.

The endeavour is rooted in education, how we as a people look back at former glory and shameful atrocities committed against colonised civilisations. In Irish secondary school, I remember the comprehensive chapter on slavery and the profound effect the illustrations had on me; people stacked like stock in the hulls of great ships. Expanding beyond a candid look at history, classrooms should also be spaces for dialogue, for kids to become sensitive to each other’s differences. No one is born racist, it is a perspective that is constructed and absorbed through one’s environment.

When people began protesting in the US, I supported every way I could, but I was infuriated by people here in Europe who assumed with confidence that we had no problems with racism. When the movement extended to our continent, I felt empowered by the momentum the movement was gathering. I was genuinely concerned this snowballing energy would peter out as the media news cycle was eager to sniff out another tragedy to focus on.

Unfortunately, the other tragedy it found was more police brutality and more violent responses from racists and reactionaries. Now is not the time to pat ourselves on the back, there are many more lives to protect, more behaviour to unlearn and a lot more history to re-evaluate.

Sean Gallen is a director and writer based in Berlin.