Anger is Trump’s weapon. It’s the reason his lies are not just tolerated, but embraced 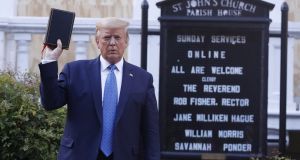 President Donald Trump’s photo opportunity in front of the boarded up windows of St John’s Church in Washington DC was another of his big lies. Photograph: Shawn Thew/EPA

About a month from now, Donald Trump will pass an astonishing new milestone. It’s going to take some restraint from him not to boast about it on Twitter.

Just over a week ago, he told his 19,127th lie in office, according to the Washington Post’s fact checker. The lies have been accelerating in the last two years, to a current rate of about 22 a day. If he can sustain that pace, he should hit the 20,000 mark in July.

They’ve been coming thick and fast over the past few weeks. The nation is under threat from domestic terrorists. He is an ally of peaceful protesters. He has done more for black Americans than anyone since Lincoln.

Why are Trump’s supporters so tolerant of his lies? Part of the reason is because so much of American identity and understanding of history is muddied by mythology and tribalism. There are many different versions of what America stands for, and the story you subscribe to depends on your tribe. There’s the American dream version. There’s the one that says American was broken from the get-go, founded in a spirit of racism that is still pervasive. There are the versions that say America was great until abortion or 9/11 or Bush or the internet or Obama or Trump.

Most pervasive of all the fictions is the one schoolchildren utter every morning when they’re in school, about it being a nation “under God, indivisible, with liberty and justice for all”. That fiction finally died with George Floyd outside the Cup Foods store in Minneapolis.

Now, if there is a unifying American value, it is rage. The justified rage of people of colour for whom liberty and justice have always felt as meaningful as words on a fridge magnet. The controlled rage spilling onto the streets, where people of all ethnicities and ages are protesting against endemic racism. The reactionary rage of the predominantly white Christian right. The performative rage of warriors clacking away nastily at their keyboards.

Rage is Trump’s secret weapon. It is the reason his lies are not just tolerated, but embraced by his supporters. He built a propaganda machine around conservative rage. Goebbels opted for a few big lies to orchestrate German anger and passivity; Trump prefers an unstoppable torrent of them. Beneath the apparent chaos of his ramblings, there is a clear strategy: deny, boast, deflect, declare victory and distract.

Last week’s photo opportunity in front of the boarded up windows of St John’s Church in Washington DC was another of his big lies. It was about declaring victory and distracting. Watching it live was like sitting through the final act in a ludicrous amateur opera. Protesters tear gassed so that he could waddle across an empty street to the church, look momentarily confused, hold a Bible in the air, and say . . . nothing. Was it his Bible? Did he hold it the right way up? Somehow, by the time it had been churned through the White House press machine, it had become a slick production in which Trump looks purposeful and statesmanlike, as chaos reigns.

Commentators waiting for the voices of the evangelical right to be outraged by such a vacuous stunt were bound for disappointment. “Offended? Not at all,” was the response on Facebook from Franklin Graham, a prominent evangelical leader. The question misunderstood the role of the Bible in American politics. It is not about religion; it is a weapon. He might as well have held a rifle aloft.

As his approval rating slid among religious Americans, Trump rallied with a message that the nation is under threat, and he will keep them safe. He was stoking a rage that has been building for decades, and not just on the right. A forthcoming book entitled American Rage by Steven Webster, a political scientist at Indiana University, finds that both parties have their share of angry voters.

Ireland is not immune to racism, as any person of colour or Traveller can attest

Those who bemoan the homogeneity of Irish politics and the dominance of the centre right might be surprised to learn that was once a complaint in the US too.

In 1950, the American Political Science Association issued a report which worried that the two parties in the US were not polarised enough and didn’t offer a clear choice. In 1960, only 4 per cent of Democrats and 5 per cent of Republicans said they would care if their child married someone from the other side. By 2019, that number had risen to half of Democrats, and one in three Republicans.

Ireland has not yet succumbed to the rage and tribalism defining US politics, but we are no more exceptional than America is. We are not immune to racism, as any person of colour or Traveller can attest. We are not free of institutional injustice. Direct provision may not, as Leo Varadkar said, be “the same thing as a man being killed by the police”, but that’s hardly a proud endorsement. It’s not one for the election posters. Nor are we immune to anger – even the organisers of last weekend’s Black Lives Matter protest in Dublin were taken aback by the strength of the protest.

As we move into the next stages of the coronavirus pandemic – the easing of lockdown, the likely second wave, the ramping up of lockdown – more people will feel left behind. There will be more mutual suspicion, a heightened sense of unfairness, more hot rage. If populism is to ever take hold in Ireland, this is the time.

Trump’s best hope now is to keep America at war with itself, churn out the lies, ramp up the rage. Our best hope is for our politicians and commentators to do the opposite: lay off the self-congratulation and the rage, and instead look critically at our own track record on equality, and start making space for voices that have not been heard.

5 Blindboy Boatclub: ‘I had the choice of being a psychotherapist or be a mad bastard’