Jennifer O’Connell: There are no winners in trans-rights culture war 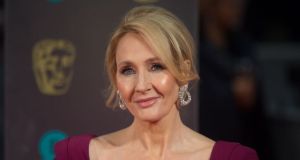 JK Rowling had been tweeting warm, gushing messages to children who submitted drawings for her new book –“Eight? How can this have been done by an eight-year-old?!” – when, abruptly, her Twitter feed took a sharp swerve sideways.

She shared an article about period poverty in the developing world and Covid-19, tacking on her own, snarky take. “‘People who menstruate.’ I’m sure there used to be a word for those people. Someone help me out. Wumben? Wimpund? Woomud?”

It was an odd way to launch the latest salvo in the most toxic of culture wars. If you failed to recognise the phrase “people who menstruate” in an article about menstruation as an assault on your human rights, you haven’t been keeping up with the roiling war over trans issues.

The issue is so incendiary, so mired in dogma, that most sensible, compassionate people approaching it with an open mind take one look and back away

Rowling’s tweet elicited equal parts applause and vitriol, as she knew it would. Days later, her name was still trending on social media. Daniel Radcliffe, Eddie Redmayne and Emma Watson distanced themselves from her. She was threatened on Twitter with “cancelling, punching and death”.

The ugly episode underlined how polarised any discussion about the issues affecting trans and gender non-binary people has become. It is so incendiary, so mired in dogma, that most sensible, compassionate people approaching it with an open mind and a genuine desire to understand, take one look and back away.

In a longer and more nuanced post, Rowling delves into why she finds the phrase “people who menstruate” to be “hostile and alienating”; develops her own thinking on sex and gender, and proffers five reasons why she is worried about trans activism.

Reasons 1-3 are to do with her charitable work and free speech. Fourth, she wonders whether as a “mentally sexless” teenager, she too “might have tried to transition”. The fifth is that she is a domestic abuse and sexual assault survivor with concerns about single-sex spaces. When she read about the Scottish government’s gender-recognition plans, she went to “a very dark place inside my head, as memories of a serious sexual assault I suffered … recurred on a loop.”

On the one hand, how could you not feel empathy for Rowling, especially after the Sun followed up with a repugnant front-page interview with her first husband under the headline “I slapped JK and I’m not sorry”?

On the other, why is she conflating her experience of domestic violence with rights for trans people? The two have as much to do with each other as octopuses and stilettos. As she acknowledges, trans people are frequently victims of violence.

In this particular culture war, where words are weapons of mass outrage, there is no room for nuance. Both sides – trans activists and gender critical feminists – are convinced that they are compassionate, well-meaning people whose duty it is to police the other side’s speech. Both claim a monopoly on the science. Both throw around unlikely scenarios and terrifying statistics. For both, social media is their theatre of war.

But there’s only one group directly affected. For all the hysterical arguments about bathrooms or elderly women scared to use the Marks and Spencer’s changing rooms, the only people whose rights are up for grabs are trans and non-binary people. And they, for the most part, are quietly getting on with their lives, far away from the arguments about biology and the shouty slogans. If you’re a young person with gender identity issues, for whom life is a daily struggle against isolation, bullying, prejudice and violence, the culture war swirling around you is a distant roar.

So far, blessedly, that culture war has been a distant roar in Ireland too. Here, in 2015, without much drama, the Gender Recognition Act passed. Since then, Ireland has been offering an administrative process for transgender people over 18 to achieve full legal recognition of their preferred gender. To be clear, this is no utopia in which to be a trans person, but it has got some things right.

Five years on, we’re managing fine in the bathrooms department. There have been no showdowns in women’s changing rooms, no explosion in men who never intend to transition clamouring to be recognised as legally female. In all, by mid-2018, fewer than 300 gender recognition certs had been issued.

Onto those terrifying statistics. Rowling claims there has been a 4,400 per cent increase in British girls being referred for transitioning treatment, she says. This is accurate, but it’s coming from a starting point of just 40 girls in 2009. She suggests the increase is fuelled by misogyny; in reality, more young people coming to terms with their identity is positive and empowering. She acknowledges that transitioning is a solution for some gender dysphoric people, but even this seems to imply there are “good” genuine trans people and “bad” fake ones.

Affording equal rights to trans people does not erode anyone else’s rights. Human rights are not a zero sum game

Autistic girls are hugely overrepresented, she says. And yes, studies have found a substantial overlap between transgender identity and autism. But it would be grossly ablest to use this as a basis to withhold treatment, especially when depression and anxiety are also highest among this group.

Most controversially, Rowling claims that between 60-90 per cent of gender dysphoric teens will grow out of it. This figure is based on flawed research which included children who didn’t meet the criteria for dysphoria.

The truth is there are no easy answers here. There are risks involved in medical treatment. There are risks to withholding it. Every situation is unique and best figured out privately by those affected and their doctors.

Despite what those who have taken to calling themselves “biological women” insist, affording equal rights to trans people does not erode anyone else’s rights. Human rights are not a zero sum game. There is no quota on the number of women allowed to exist in the world.