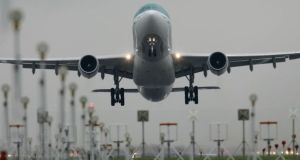 As an island economy, Ireland has a huge reliance on the connectivity and mobility that aviation provides. Photograph: Alan Betson

The Taskforce for Aviation Recovery has called upon the Irish Government to lift the 14-day quarantine period that applies to passengers arriving in Ireland and to ease the restrictions on non-essential travel. It says both of these things should be done by July 1st.

The taskforce is charged with advising Government on what is required to facilitate a recovery in the aviation industry in the face of the unprecedented crisis that has been brought about by coronavirus. It is doing its work in a careful manner and has not simply focused on aviation-specific concerns. It has also considered the analysis and recommendations of the European Centre for Disease Prevention and Control (ECDC), the European Aviation Safety Agency (EASA) and the European Commission.

Crucially, it has also had regard to the critical importance of the aviation sector to the Irish economy. Together with tourism, aviation supports €17.6 billion of GDP annually and provides employment to 140,000 people in the Irish economy. As an island economy, Ireland has a huge reliance on the connectivity and mobility that aviation provides. Given the catastrophic impact the coronavirus crisis is having on the economy, the restoration of air services is urgently needed to help our economic recovery and boost employment.

That restoration of services needs the lifting of the 14-day quarantine period and the easing of travel restrictions. And it can be done safely.

On May 20th, the ECDC and EASA issued an “aviation health safety protocol” outlining measures including the wearing of masks, the cleaning and disinfection of aircraft and airports, the reduction of in-flight service, the restriction of access to airports and modified queuing, security and boarding processes. These measures are designed to allow a safe resumption of air travel by comprehensively mitigating the risk of transmission of the disease in the airport and aircraft environments. ECDC and EASA have also confirmed that there has been no recorded instance of transmission of the virus on board an aircraft throughout Europe.

Airlines and airports are ready to implement Ireland’s transposition of that protocol, the “code of practice for the management of air passengers in light of Covid-19”. The aviation industry has a strong track record of effective implementation of all applicable safety standards – it will now effectively implement the new protocol mandated by the European health and safety authorities.

On the basis of the work done by the ECDC and EASA, the commission has invited member states to progressively restore transport services and connectivity. On June 11th, European commissioner for home affairs Ylva Johansson called upon member states to lift all border restrictions within the European Union by June 15th.

The commissioner stated: “With the health situation now improving in the EU, the commission recommended on June 11th that member states remove such restrictions by June 15th, 2020.” Ireland stands alone within the EU as having failed to do so.

Ireland’s economic future is critically dependent on an urgent resumption of air services. That can be done safely and in line with best practice European guidance

Ireland’s reluctance to act on the recommendations of the commission is baffling on a number of fronts. Firstly, there has been significant success across Europe in containing the virus, with very low average daily growth rates in each country. From a comparative perspective, the level of success in containing and controlling the spread of the virus in these European countries is equivalent.

Therefore, travel between these European countries and Ireland does not translate to an increased level of risk. Secondly, for Ireland to be the laggards of Europe in lifting its quarantine requirement and easing travel restrictions is inexplicable given Ireland’s heightened reliance on connectivity and mobility as an island economy. Ireland’s current stance is therefore a significant economic and social own goal.

The Government is currently indicating that air services could resume if there were “air-bridges pairing Ireland with countries with a similar level of control of the virus”. Germany, which has no quarantine in place, has outlined criteria for when it would consider imposing one in respect of people travelling from the EU, the United Kingdom and various other states. It would consider doing so if there were more than 50 new infections per 100,000 of population over the previous seven days. Ireland would have to have 360 new cases on a daily basis to breach that threshold. On June 23rd Ireland had 10 new cases.

The taskforce emphasised the importance of economic coexistence with the virus. Ireland’s economic future is critically dependent on an urgent resumption of air services. That can be done safely and in line with best practice European guidance. However, it needs the Government to act now to lift the 14-day quarantine period and to ease travel restrictions.